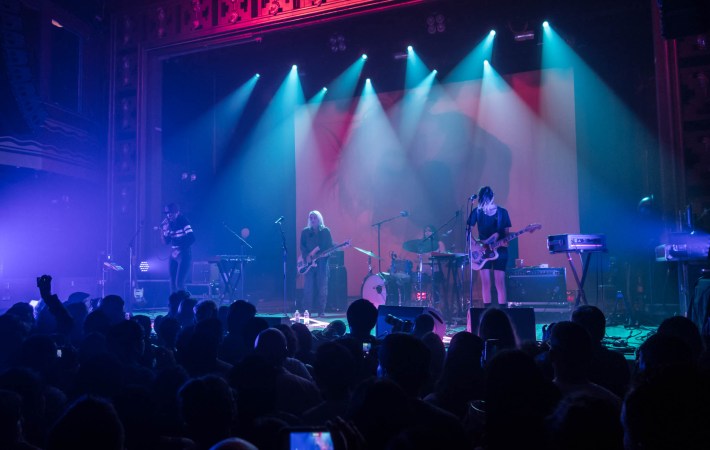 At one point, Emily announced that this would be last last show in NYC for some time. It may look like they never stop touring, she said, but they would stop soon. Somehow, this kind of sentiment hung in the air on Tuesday night at Webster Hall: a long, successful run of live shows after the release of their second album Warpaint nears its end.

That does mean that Warpaint is tired of playing yet: it was an evening with many highlights, from the moment Theresa entered the stage with a dorky hat from the merch stand (what is she doing with that?), over the live rendition of CC, the only song that features Jenny on lead vocals (a birthday present for her husband Chris Cunningham), to Drive, currently my favorite Warpaint song (Emily never sings more beautiful than here). There was a Krimson/Burgundy double feature and and the obligatory, endless Elephant jam with at least four fake ends.

Warpaint invited again to an afterparty somewhere in the caverns of Webster Hall, but it was a school night and already past midnight, so we couldn’t go. I hope they can’t stay off the road for too long, but somehow I have the feeling this time the break between albums will not be shorter than the last time.