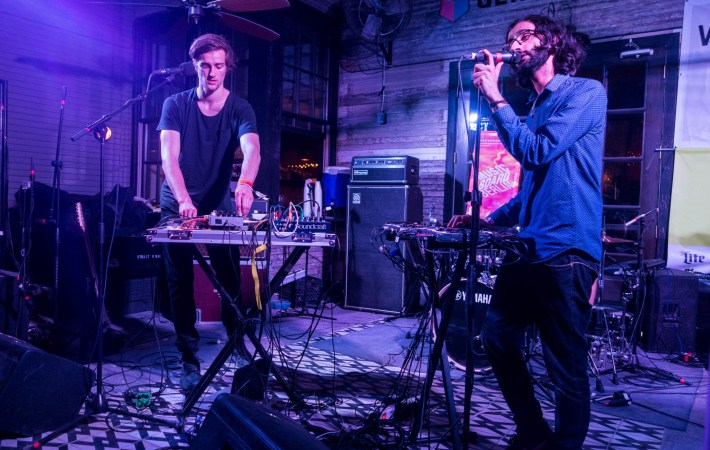 Filed Under: SXSW — By: Oliver Bouchard

After a quiet, sit-down dinner we went off to Rainey Street, the classy part of SXSW. Shows take place in upscale bars housed in large family homes instead of dive bars like on 6th Street. First stop was the German House at Lucille, where Vimes, an electronic duo (plus a live drummer) from Cologne wrapped up their set.

After that we finally saw Agoraphobia a five piece from Spain, who happened to be the first band on the first batch of artists announced for SXSW 2015. I liked them right away back then. Live, they are refreshingly different in style and their music puts the bass front and center, while the two guitarists take a backseat.

2:54 at Bar 96 were the second sister duo for the day. I follow them since their first single and they put on a great live show (just their touring bassist pushed himself a little too much into the foreground). Interestingly, two people asked me if I knew them and were surprised when I did. That alone demonstrates that SXSW is a good place to connect to new fans.

We closed out the night at the madness of 6th Street. Bully, a Nashville alt rock quartet fronted by singer/guitarist Alicia Bognanno played at Maggie Mae’s and Close Talker, who we’ve seen previously in Brooklyn wrapped up the Canada House at Friend’s.