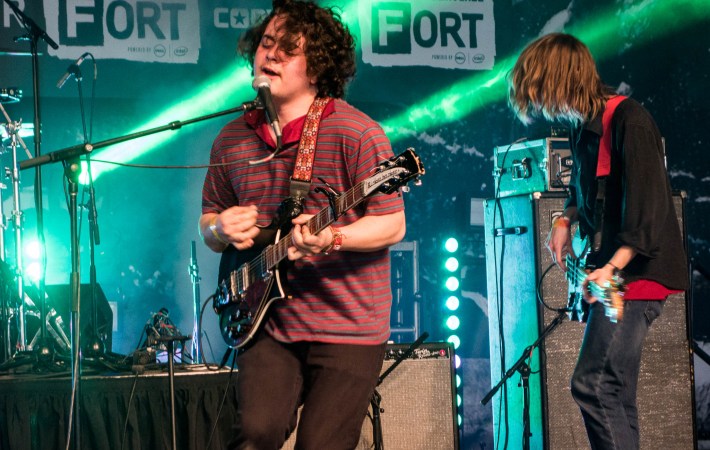 Filed Under: SXSW — By: Oliver Bouchard

From my perspective this was supposed to be Ibeyi day, so we rushed to the convention center to pick up SXXpress passes (some sort of wildcard that can help to get into a venue in time) for their evening show at the church. After attending a panel we decided to check out the Fader Fort, a festival within the festival, known for prohibitive lines. We were lucky and could go straight in after becoming almost dizzy by walking around the fences designed to hold a much larger crowd.

We were even luckier that The Districts from Philadelphia were on: this is one of the two acts whose vinyl we bought this year so far. Their show was another sign that straightforward rock is having a renaissance. It was a brilliant set, enhanced by the big stage lighting at the Fader Fort.

Then the rain hit in full force. Ponchos were dispensed and the police was ready to evacuate the place. We could have had it worse – we we had drinks and some time to check out the entrance booth: there was a 3D printer demonstration (Dell is a sponsor) and the chance to get free shoes (Converse is a sponsor).

But back to music: when the rain came down to tolerable levels, we went over to the Hype Hotel on the other side of the street, again no lines. It was housed in a huge market hall and felt a little too big for the usually more intimate SXSW experience. We saw a glimpse of George Maple from Australia, who I need to check out more after the festival.

Mansionair at The West Tent

At the convention center, the Aussie BBQ was going on all day. By then the weather had turned quite miserable: constant rain and dropping temperatures (it has snowed back home in New York, so no complaints). Mansionair, one of Elke’s must sees, played a short set at the West Tent, with the members of Close Talker in attendance.