The Districts live at The Fader Fort, Austin SXSW 2015 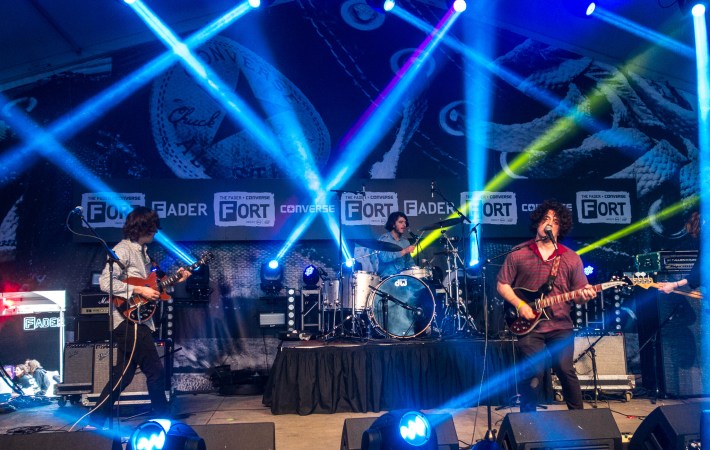 The Districts live at The Fader Fort, Austin SXSW 2015

Mid February, I came across The District‘s album A Flourish And A Spell, could not stop listening to it, and put my thoughts into an album review. Naturally, they were high up on my list of “must sees” when in Austin for the music festival. With all planning though, it looked as if I could not see them after all…

On day 4, March 20th 2015, and not having been to the famous Fader Fort + Converse venue yet, we headed over to the giant site, where there was no line. We could walk right in after having gotten our coveted wrist bands, and much to my big surprise and joy The Districts were the act to play at 2:15 PM. Luckily, people were busy with getting their two free drinks or any of the many other activities and freebies The Fader Fort has to offer, and so I could make my way to (almost) front row and enjoy the energetic, skillful show as close as it gets in that huge tent!

Don’t get fooled by The District’s young age (they are all still under 21) because they put on an enigmatic show many veterans could get jealous of. Much has to do with lead singer Rob Grote, who impresses with a powerful voice, paired with a charismatic stage presence and the necessary guitar chops. The other band members are drummer and back-up vocalist Braden Lawrence, bassist Connor Jacobus and guitarist Pat Cassidy (who replaced Mark Larson in mid 2014) – all savvy musicians and performers as well.

Shortly after The Districts ended their set, an announcement tried to dampen the joyful atmosphere warning of “severe weather” and the possibility that the tent and the whole site must be cleared. Taking it on the safe side, we soon there after left the tent only to get sort of trapped in the  main area until the heavy rain cleared a bit. My soul was happy: I’ve seen The Districts live. And they were fantastic!

The light and the sound were so fantastic at this show, that I got tricked into trying a little video, The outcome is not as great as the show was, hence take the following as an “appetizer” and try to get your hands on tickets for a The Districts show near you.

One of the maybe quieter, yet definitely catchy songs of A Flourish and a Spoil, Peaches: