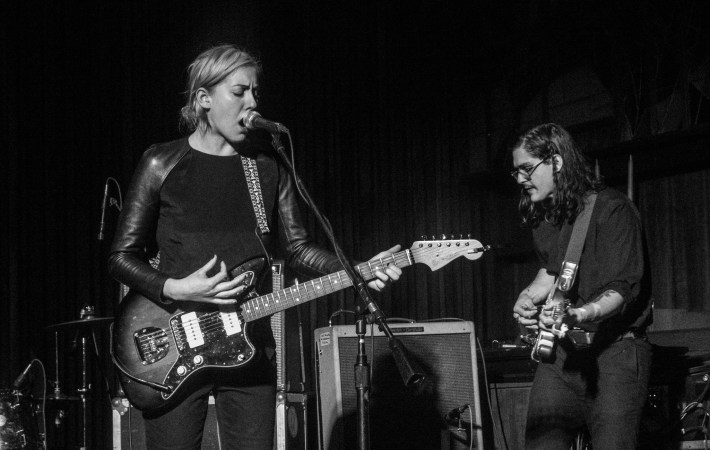 TORRES (Mackenzie Scott) was also on our list of “must sees” when in Austin for SXSW 2015 but I didn’t think we’d catch any of her shows and most certainly not the one at 1:00 AM Saturday night, basically the SXSW “closing” show. And yet, here I was, shortly before Midnight, to experience one whole set of the Swedish band Amason, before TORRES put their gear on stage and played the 1:00 AM show.

By then, I snatched a 2nd row seat, well appreciated at this time of day and five days into the festival. Besides, there’s not really standing room in the Central Presbyterian Church, which lends its space to the festival. When Mackenzie and her band (drums, synths/keyboard, guitar) took the stage, I was not prepared for being mesmerized for the next 45 minutes by the beautifully, haunting music that filled the church. It was impossible to remove my eyes from the tall, slender woman, dressed in black jeans and a fashionable knit-and-leather top, with wheat-blonde hair, who played guitar as there was no tomorrow, all the while performing her extremely personal songs with vocals that touch and go under your skin.

If you happened to have been to that particular show, then you were lucky. If not, try to catch TORRES on their current tour. And if you’re in Austin during a music festival, try to catch a show there, because… it will be magical! Stay informed and follow TORRES on her Facebook page and/or Twitter.

Probably my favorite song of Torres first studio album, released in 2013 is Jealousy and I – so simple and so powerful.

And in contrast (not really) her latest, official video for the title song of her upcoming album Sprinter with release date May 4th, 2015: