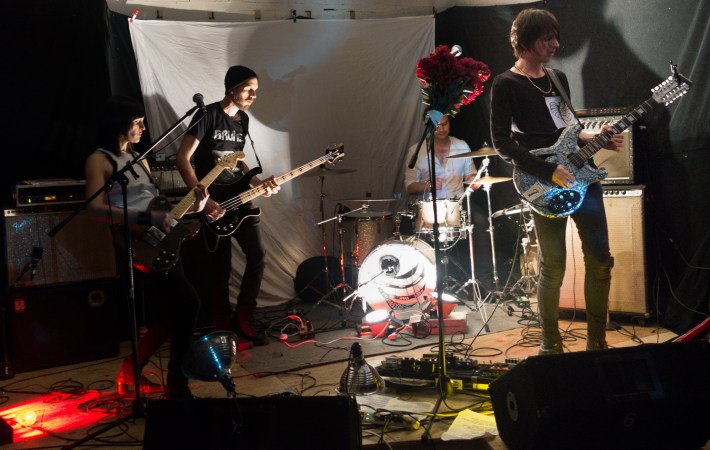 Having seen Dead Leaf Echo not even two months ago at this year’s South By Southwest festival, playing old favorites but also some of their exciting new material, I was especially intrigued to see them at a Brooklyn venue, that I didn’t know yet. Last Friday, they played together with The Midnight Hollow, Tiers and Second Still the fairly new Alphaville Brooklyn. It’s one of these more intimate venues that I prefer over those mega halls for audiences of thousand people and more. As a bonus, you can not only enjoy different kinds of craft beers from tap, and some decent wines but satisfy any food cravings – all reasonably priced.

While having missed the first band, I could listen through the entire set of Tiers, a synth-wave trio from Brooklyn,  who did a great job in setting the mood for Ana, Steve, Kevin and LG of Dead Leaf Echo. Naturally, Dead Leaf Echo played proven favorites like Kingmaker from their 2013 album Thought and Language, as well as so.wrong from the visually and musically beautiful EP true.deep.sleeper. But they also once more provided us with a glimpse of where they’re going next: their sound might get a little bit “rougher”, with some post-punk edges, with more female vocals and maybe even a little bit less seriousness but overall more playfulness and fun.

One thing is for sure: we can look forward to some cool new recordings to come!

Watch the stunning video to so.wrong: