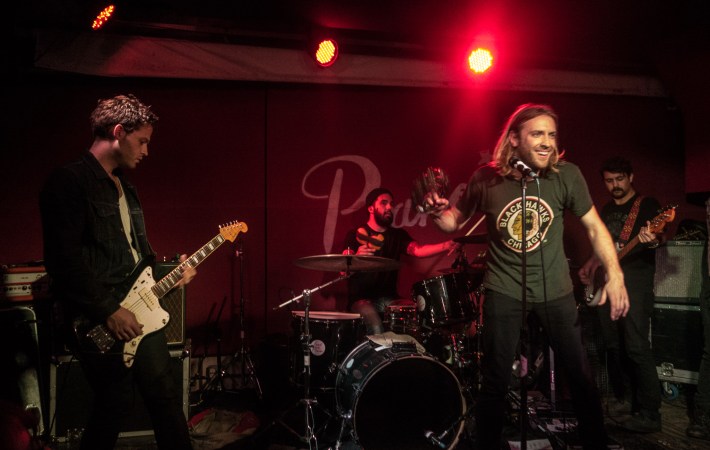 Empires, who are currently touring together with Geographer, also made a stop in New York to perform songs from their most recent album Orphan, released in September 2014. When I heard about their show at Music Hall of Williamsburg (May 21st), I was about to buy tickets when I learned that they’d also play Pianos (May 20th). Having secured my tickets for the much more intimate Pianos, I was anticipating the show, having listened to Orphan countless times.

I knew little about Empires other than that they are a band of four (live they are five) hailing from Chicago. Despite following them on Facebook, I didn’t even know what they’d look like or that they have been invited to the Letterman Show in June 2014 – a serious career booster for so many bands! The more I am now in awe having been part of a crazy cool show. I can’t help but love and admire professionalism and a band’s love for their music no matter how small or big the audience!

Not wanting to miss a single moment, we arrived early and caught the full set of the opening band Controller, and are psyched having done so. Controller are a Brooklyn five piece who are currently working on their studio album and only performing here and there. The venue was nicely filled but not packed and I am sure that there were still some last minute tickets to be had.

And then Empires took the stage at 10:00 PM. Frankly, I was ready for more good music! I was not prepared though for the singer’s, Sean Van Vleet’s, good surfer looks, that it would be him having these killer vocals all bold, velvety at times and charming, with (what I think!) unprocessed vocals. I don’t remember with which song Empires opened their set but I know that they played almost the entire Orphan album including their breakout hit How Does It Feel – sounding live as atmospheric as recorded. Aside from new material, they also played a few older fan favorites, which the group of young women in front of me seemed to cherish in particular. The evening went by too quickly and left me craving for more… another chance to see Empires again, even if it has to be in a bigger venue, as it will be the case with a rock band that creates catchy tunes and also knows how to deliver them.

The video to the snappy, upbeat Please Don’t Tell My Lover is… a strange one. But see for yourself:

Catch Empires live and get mesmerized by great sounds and performances all around.