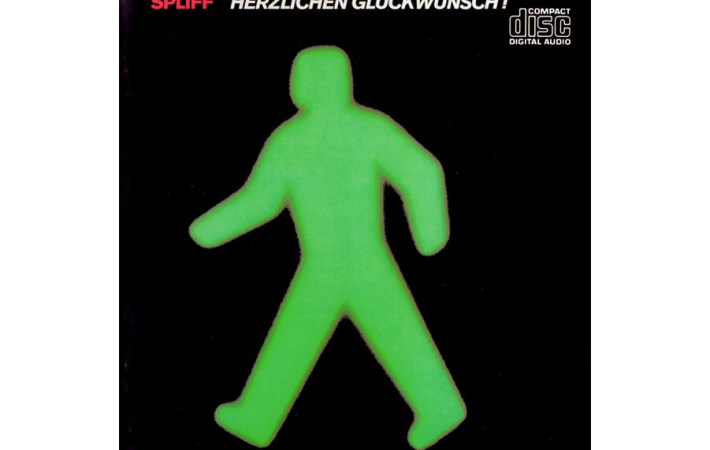 Elke already introduced the Berlin band Spliff, whose first two albums were both excellent. They became my favorite band with their second release Herzlichen Glückwunsch (“Congratulations”). It has a similar structure like its predecessor 85555 with a weird and trippy opener, a epic closer and a smash hit somewhere in the middle. Das Blech (“Sheet Metal”, don’t ask) was the name of the first single and in it keyboarder Reinhold Heil talks (raps?) about a night out at the disco. Like most Spliff songs it is rich on quips: lines like Bei Wagner muss ich kotzen // bei Mozart werd’ ich krank (“Wagner makes me vomiting // Mozart makes me sick” resonate well with teenagers at a time when classical music was still considered the “real” kind of music.

With Spliff’s songs it’s often unclear if they are completely nonsensical or have a deeper meaning, like in Wohin, Wohin? (“Where To, where To?”) in which drummer Herwig Mitteregger tells the story of a doomed trip through North Africa in his signature, on-the-edge madman’s vocals. Or in Die Maurer (“The Masons”), a song about, well, masons (I love the bass line in this one). But on the other side there are songs like the nightmarish Glaspalast (“glass palace”), which reflect the dark sides of the 80s zeitgeist.

The Neue Deutsche Welle lasted only a few years, before it melted into the mainstream. While bands like Spliff continued to make music, it somehow had lost the punch of the early years. Today, it is history.