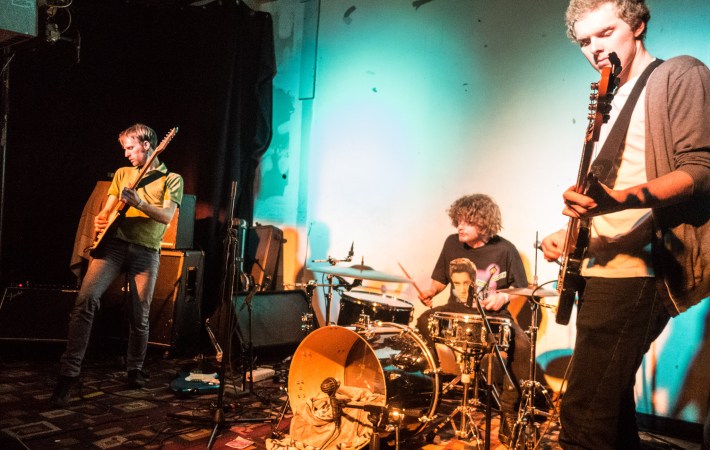 When Salad Boys from Christchurch, New Zealand took the stage,  Holy Tunics and The Britanys had the audience already going and ready for more guitar driven indie rock.

What Joe Sampson (vocals, 12-string guitar), Ben Odering (bass) and Jim Nothing (drums) put on stage was impressive and highly enjoyable. It’s always especially interesting, for a guitar lover like me, to see someone play a 12-string and doing so throughout the whole set, not exchanging it with another guitar.

While the just released full-length album Metalmania (Trouble In Mind, 9/18/15) starts out rather slow and mellow with Here’s No Use, nothing was soft about Salad Boy’s performance that night. Joe Sampson’s intensity was palpable at times: strumming his guitar, singing, looking at the audience, searching for something? Ben Ordering focused on playing bass, and Jim Nothing explained where he got his Elvis Presley fan t-shirt from. The band clearly enjoyed playing Palisades, a Bushwick venue increasing its profile rapidly. They also certainly made new fans that night, with having put on such a fantastic show!

Watch the video to Dream Date the maybe catchiest song on Metalmania: