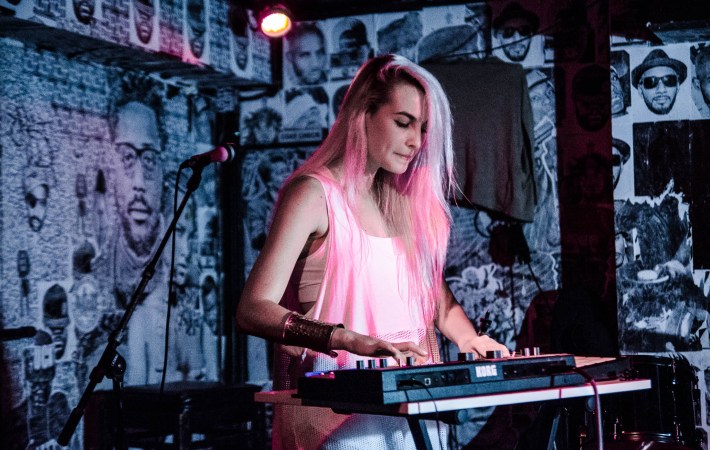 Elke and I split forces at the beginning of Wednesday evening: she went to Leftfield to see Foxtrax, an alternative rock three piece who blew her way. I started the day at Arlene’s Grocery for the 24West showcase to see Syvia, also from New York, who play a more electronic brand of rock. Unfortunately, for technical reasons, I could see most of their performance only on the TV in the front bar. But even after only one song, it was clear that their debut album rather played down the energy they show on stage.

The next two acts, OWEL and Controller were clearly aiming for much bigger stages than Arlene’s. OWEL goes after Muse with their big orchestral sound out of guitars, synths and a violin, while Controller’s pop rock benefits much from their charismatic, animated front man.

Our next stop was the Rockwood Music Hall, a three stage venue that presents some 100 CMJ shows, all for free. I wanted to see Monogems (our song pick yesterday), the project of Californian singer/songwriter Jen Hirsh, who has a wonderful voice, which is supported by upbeat electro pop and, for the occasion, a saxophone.

On the way to our last stop we meet StarBenders from Atlanta, who played Leftfield that night. I don’t know (yet) what music they make, but they looked great (and that’s a not unimportant fact at a live show). Unfortunately they don’t have another show. What’s up, New York City music venues? In Austin everybody seems always easily get into numerous unofficial shows and you let this band come all the way from Atlanta, just for a single show?

Last band of the night was Lara Snow an electronic duo from Tel Aviv, who could be as well from Sweden and not only because of their blond hair: with their beat-driven, melodic sound they reminded me of Kate Boy.