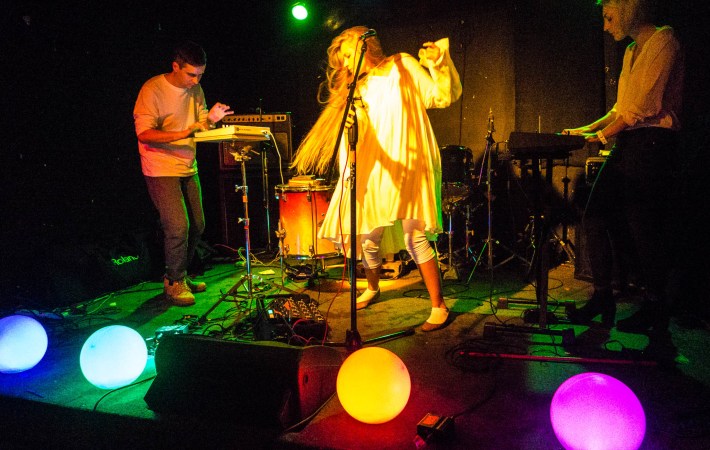 It was the last day of CMJ 2015 and a week of long days and short night were starting to take a toll: we couldn’t make it in time to the Moniker Records showcase at Palisades, where I wanted to see Gel Set. There will be a next time and I feel we need to visit Chicago soon anyway.

But then, at least, we were in time for Dilly Dally at the Brooklyn Vegan showcase at Baby’s All Right. Fantastic! The Toronto four-piece surely woke us up. They are back in NYC for two more shows in November: don’t miss them.

We wanted to move on, but then the setup of Stealing Sheep looked quite intriguing with an array of electronic and acoustic instruments. I ended up staying for the entire set: Becky, Emily and Lucy do some synth-psychedelic weird pop with three-sided harmonies. Great stuff.

Over at the Black Bear Bar, Brooklyn punk rock three piece Samantha provided another jolt of raw energy, before we went to the third Audiofemme and Atypical Sounds showcase of the festival.

First on was Gold Child, this time fully plugged in after we saw her acoustic performance the day before. It was her first performance with a full band: and I’m looking forward to seeing more of her.

Next up on the same stage was Von Sell who does electro pop songs with thick synth layers. Once you heard them, it’s difficult to get them out of your head again. Instantly super catchy!

From there we rushed to Bar Matchless for the Light Minutes Away showcase for Letters from Nepal. They play etheric soundscapes cut by a fierce beat and topped by Evgeniya Kuznetsova’s beautiful vocals.

Unfortunately, we had only time for two songs of OLYA, whose debut EP Utopia we liked a lot. But that’s CMJ: for one show you see, you miss five others you should have seen.

Elke went off to Music Hall of Williamsburg to see Avid Dancer, performing his beautiful debut album Birth, while I came back to CAMEO to see Beverly – unfortunately the lighting situation at the doomed venue didn’t allow me to take any photos.

And with that, CMJ 2015 ended for us. Keep checking back to glamglare.com: we will work hard to weed through our photos and will post them here over the next couple of weeks.