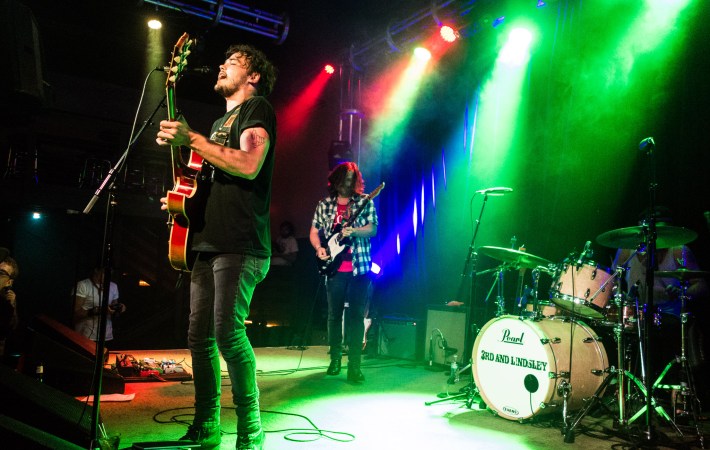 Last Sunday, during our fantastic weekend trip to Nasvhille, I had the great joy of seeing not just one but two alt rock bands who call Music City home, and proof that there’s more than folk and country to this place. The fairly spacious gastro music venue 3rd and Lindsley was nicely visited for a lazy Sunday night, and all came to see Future Thieves and Kink Ador, a line-up put together by the independent local radio station Lightning 100.

First up were Kink Ador, headed by Sharon Koltik, who writes the songs, sings, plays bass and also the occasional trumpet. Her band gets completed by Michael Kisak on guitar and Jon Mann on drums. Kink Ador’s music can be best described as somewhere between The Police and The Talking Heads – no small feat! Between each song, Sharon told little stories that gave the excellent material context. Leave This City for example was inspired by troubles they performed when performing in New York and one particular venue once. Little did Sharon know that she would have Brooklynites sitting in her audience that night! Thankfully though, this led to a charming after-show chat and I’m looking forward to seeing Kink Ador again come Fall, this next time in my hometown… Follow Kink Ador on Facebook and/or Twitter.

After some on-air banter by the chipper radio host, and clearance of more space in front of the -impressive- stage, Future Thieves were up. Austin McCool on lead guitar positioned himself on the far left, in the back Gianni Gibson took the seat behind the drums, front and center belonged to Elliot Collett with his killers vocals and rhythm guitar, and to his right Nick Goss stood tall on bass and background vocal duties. The music that Future Thieves create is -for my ears at least- instantly likable!

I do like contemporary Southern Rock with Ha Ha Tonka from Missouri, Lee Bains III & The Glory Fires from Alabama and yes, Kings of Leon as probably my favorites… until now! If hard pressed, and that’s also what I told Austin in our lovely after-show chat, Future Thieves do remind me of the early Kings of Leon, and how could they not with the classic four piece set-up, distinct guitars, unique vocals and catchy songs with instant hooks?

Proof that Future Thieves are one of the coolest bands coming out of Nashville to watch out for? They just got added to the rooster of many cool bands playing this year’s Bonnaroo Festival. Granted, they won’t have far to travel, yet the 6:00 PM spot on Thursday, June 11th should gain them many new fans – and rightfully so. (They’re not even yet officially listed, that new was the info, announced on Sunday’s amazing show.).

== All concert photos by glamglare.com – Elke Nominikat and Oliver Bouchard =

Follow Future Thieves on Facebook and/or Twitter, listen to their EP and check out if they play anywhere near you and then go and see them live!