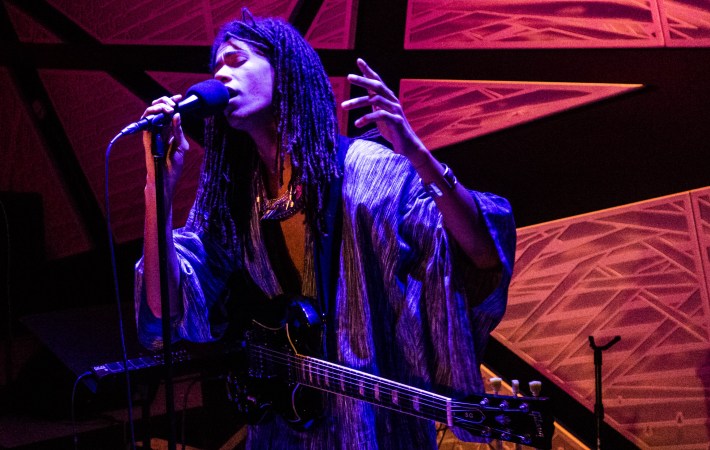 The common view at the Williamsburg music scene is one of decline, that corporate interests push artists and venues out of the neighborhood and eventually the city. But then there is National Sawdust a brand new, beautiful and high quality non-profit venue with a high-minded agenda right on North 6th Street. Maybe things are not that bad after all.

Last Wednesday, we finally made it to National Sawdust for an eclectic lineup presented by creative agency Matte. Opening, closing and break-filling was a futuristic DJ set by Swedish producer Kissey who spun an astonishing broad selection of music. Together with the ambience, there would have been a great cocktail party vibe but, due to a hiccup with the liquor license, there were no cocktails. (The free flavored Perrier could not quite substitute).

First on stage was New York via London via DC singer and producer Oyinda, backed by two musicians, a beautiful and charismatic performer of emotional electronic music with a hint of R&B. She played a variety of new songs and I’m hoping for a follow-up to her 2014 EP “Before The Fall” soon.

The second act was Parisian singer and producer Dream Koala, who played guitar and let his computer do most of the rest. That usually doesn’t make for the best show, but his beautiful, dreamy songs and charismatic appearance still had enough power to enchant the audience.

It was a perfect lineup for National Sawdust, which is more a concert hall than a music venue and strives to foster genuine art, rather than being a stop for touring artists. We will have a close eye on what is happening there next.