3 Is A Band: Pretty City 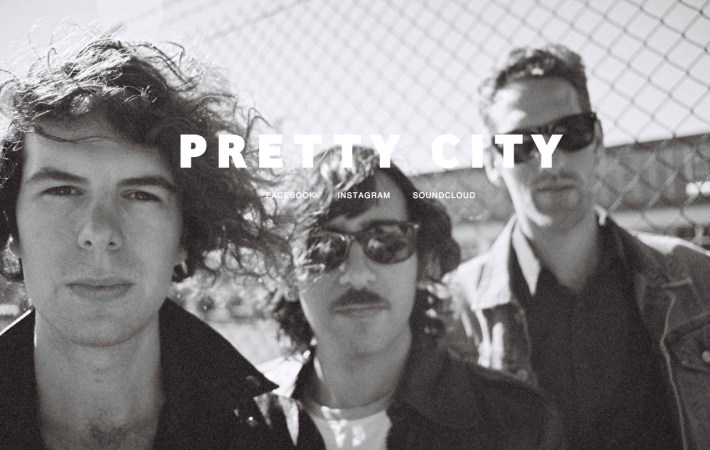 3 Is A Band: Pretty City

It won’t be the first time that Melbourne’s aptly named fuzz rockers Pretty City will be playing state side, because they’ve been touring the East Coast twice last year, but it is only now that I found out about them, since they are scheduled to perform in Austin, TX for SXSW.

For me, Hugh Matthews (vocals, guitar), John-Luis Moretti (guitar, vocals) and Drew Schapper (drums) stand out in the flurry of other cool bands, even other cool Aussie bands! It certainly has to do with the fact that I love melodic rock, with psychedelic and shoegaze edges, lots of guitars and great vocals. It all comes beautifully together here and if Pretty City’s music on SoundCloud is any indication, their highly anticipated album to drop in April will be spectacular.

We can hear catchy hooks and great pop melodies over fuzzy guitars, mixed with grunge, powerful rhythms, cool guitar riffs and vocals that manage to surprise and delight. Yes, influences from My Bloody Valentine, over Black Rebel Motorcycle Club to Smashing Pumpkins are certainly there yet Pretty City’s music sounds fresh and contemporary and as spot on 2016 as it can get.

Here’s a young band from Australia ready to make an impact, and I am pretty certain they will. Now let’s listen to some music and watch some videos: The Video for “Falling In And Out Of Love” captures the spirit of the title pretty well. It’s an atmospheric band video:

Here’s hoping this song makes it onto the upcoming album, because I like “Roll On” a lot, and would enjoy putting the needle on the beginning of side B when this song plays as track number 6 (just musing here…):

Let’s warp with the video for “Melt”, which I made Song Pick of the Day earlier this month, when first coming across this fabulous fuzz-rock-trio:

Plus their shows in Austin, TX for  SXSW and then hopefully some more in the US.