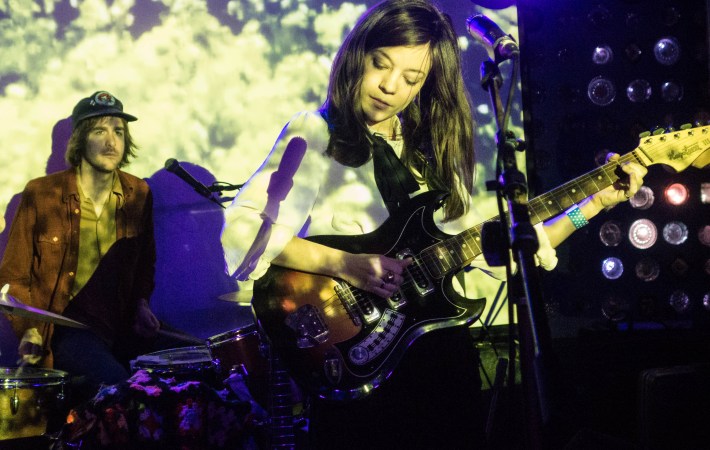 After impressive performances by Cut Worms and Lionlimb, the night and the sold-out venue clearly belonged to Quilt, the Boston quartet whom the audience came out to see celebrating their just released new album “Plaza”. (NPR offers a nice track by track feature of Quilt’s third studio album).

In almost lightening speed, Quilt set up their gear on stage, when finally the A/C kicked in and Anna Fox Rochinski’s set-list began flying around. With the help of some caring fans, this dilemma could get fixed. Unfortunately though, there was no fix for their own personal projector-based light show. Only two songs in, it gave up the ghost, the screen got rolled up and Baby’s All Right’s iconic backlights took over again. (Hence, only a few of the “psychedelic shots”).

Quilt is a band where singing duties are  getting almost equally shared, resulting in a diverse vibe. Not only do they create a different feel for their songs via different vocals but also stylistically: there’s ‘classic’ shoegaze, followed by a funk and then a pop-oriented track, with taking cues from blues and then rock again.

The band keeps pretty much to themselves, only sometimes addressing the audience like providing a semi-explanation to what has happened with the projector, when Anna states: “Agh, technology, there’s only so much you can ask for.” or when later on John Andrews declares: “It’s time for the drummer to sing a song, while you all can take a bathroom break. I will say this joke every day on tour.” – and nobody leaves. Of course not.

See Quilt live* if you get a chance and click on a photo to start the slide show:

== All concert photos by Elke Nominikat and Oliver Bouchard ==

Listen to the beautifully chilled “Roller”, the first single from their album “Plaza”: