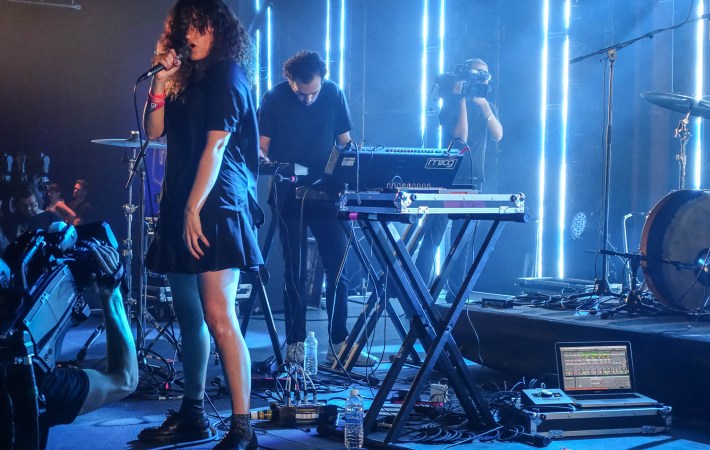 Here we are again in Austin, Texas for a week full of music. This year there was no easing in: our schedule was packed with events already on day one all across the city.

Because we arrived fairly early, when the city was almost still asleep and it looks until the lunch break at Darwin’s before we saw some live music: [The Black Atlas], a five piece from Brooklyn (of all places) heated up the room quickly.

There were followed by Blankus Larry from D.C., two guys who are hitting it hard just on drums and guitar.

To celebrate the 30th SXSW Music event, there was an official opening party for the first time at Maggie Mae’s. Naturally it was packed and hard to get a glimpse of the music that was played on top stages. Fortunately Kristin Control, the new stage name of Dum Dum Girls singer Dee Dee, was DJing cool music on the rooftop.

Skyline was a young local band we discovered last year, so we could not miss their show at The Sidewinder. They do earthy rock’n’roll with power vocals and some insane guitar playing.

Next we were heading over to Congress, were we saw Lex, an ultra-stylish L.A. band, whose gold and black theme and 80s-inspired, dark synth pop fit very well into the pitch dark show room of The Townsend. Update: More Photos.

Unfortunately we could only stay for a few songs, because another L.A. band, the noise rockers Sextile were up at Barracuda, the former Red 7. They put on hell of a show with two guitars, vintage synths and an ultra-cool stand-up drummer.

Last of show of the night was Empress Of over at the Hype Hotel, which is this year again a massive venue with a stadium-style big stage. At 1 am, it was the latest show she ever did, but that didn’t keep her from rocking the house, like she always does. Update: More Photos.