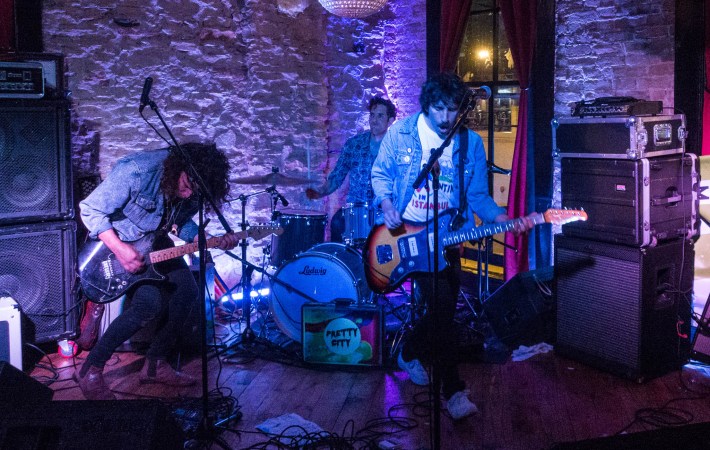 Day 2 started off slowly: we were invited to a delicious brunch by ILA, an Austin record label with a new approach. Thank you! From there we headed to the Floodfest at Cedar Street Courtyard, which sports an incredible lineup this year.

There we were lucky to catch a full set by Hælos, a three piece on our must-see list (so must-see that we have already tickets for their NYC show after SXSW). Live they play with a bass player and two drummers, which frees two of them up for almost exclusive vocal duties and makes for a very engaging live show. Update: More Photos.

Over at Brush Park Spain and Canada celebrated their music. In the West Tent, we witnessed The Parrots bringing (almost literally) the tent down. Also in attendance, the singer and drunmer of Pretty City, who we discussed the parallels and differences between the U.S., Australian and German music scenes with.

At the Canadian Blast BBQ we caught Milk & Bone a electronic pop duo from Toronto. Then, next door, at the Registrant’s Lounge we ran into Suzanne Vega, who Elke and I are huge fans of. These are the surprises that make SXSW so great.

After the obligatory dinner at Stubb’s, we headed to Elysium, where we caught some song by [Holly Macve](Holly Macve). She played a chills-inducing cover of Leonard Cohen’s “Suzanne” when we entered the room and her stage presence puts her on a sure path to stardom.

But the band we were here for was Doomsquad a fabulous sibling three piece from Toronto, Canada. LCD meets Talking Heads meets B52s meets Fever Ray I noted. Together that means simply awesome. Update: More Photos.

A few blocks away, our friends Dead Leaf Echo played a new venue Tellers. They are pushing shoegaze into more noisy territory and their upcoming album is something to look forward to. Update: More Photos.

Next up at the same venue, fuzz rockers Pretty City from Melbourne, Australia, also a must-see three piece on Elke’s list. They surly know how to rock the house.

Heading over to the Intercontinental where Overcoats were playing, a folk duo who decided that sparse electronic textures and beats would enhance the sad undertone of their songs and they were absolutely right. You will hear more of them, here on glamglare and elsewhere. Update: More Photos.

Last act was London electronic band Avec Sans at the cozy Lucky Lounge. They met the challenge on how to make mostly sequenced music visually appealing with three Novation Launchpads, which can be played while doing a light show at the same time. As a programmer and geek I have to say: what a brilliant job by producer  Jack St. James. And then there is Alice Fox singing next to him…