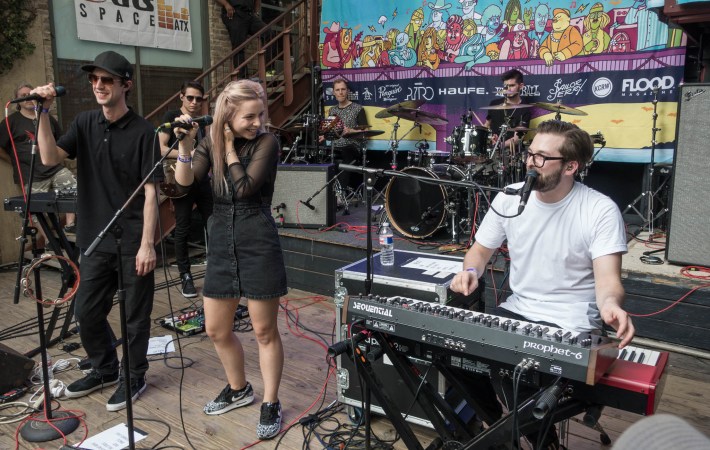 When we sat in one of the bars around Cedar Street Courtyard during SXSW, music started playing on the Floodfest stage. After hearing a few bars, I got up and went outside: I just had to see this. It took a while until I discovered on the set list that the band was HÆLOS from London, an act on our must-see list.

And this is whatHÆLOS’ music is doing to you: it immediately draws you in with its dramatic buildups. The mix of male/female vocals, dense keyboard layers and intricate beats makes the music feel immediately important and meaningful. The live show underlines this: as a mostly electronic band,HÆLOS had a choice on how to present their music on stage. They chose wisely: Arthur Delaney and Lotti Bernadout sing almost exclusively, while Dom Goldsmith mans an array of keyboards. They are joined by two drummers and a guitarist, all of which lead to a very organic experience, all without showy “Look, we can play real instruments too” moments.

HÆLOS are embarking on a major U.S. tour and also play the summer festival circuit. If you can’t catch them live, they just released their debut album “Full Circle”, which works as well as their live show. Put it on headphones and you will have a similar moment as I had at SXSW.

“Full Circle” is out now on Matador Records. Listen to it on Apple Music or on Spotify.