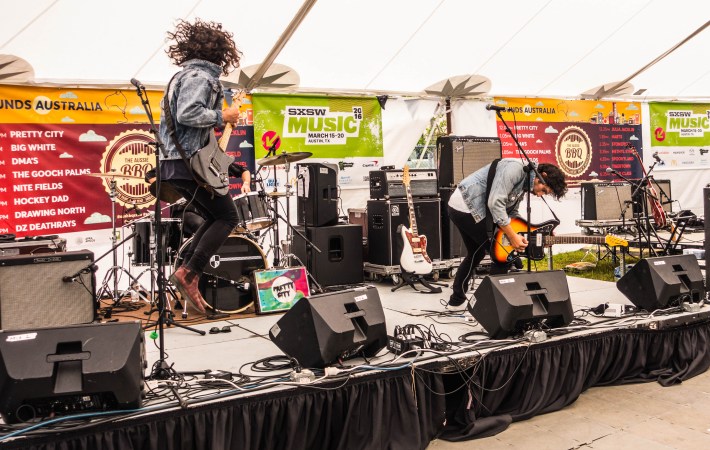 One of the highlights of this year’s SXSW, during a festival filled with fantastic moments and incredibly awesome music (we were so lucky!), was meeting Pretty City, from Melbourne, Australia. I’ve been portraying Pretty City in our #3IsABand feature and declared them to be one of the SXSW2016-must-see trios, which still holds true.
Putting our money where our mouth is, we had planned to see the band for their “official showcase” at Tellers. This being one of the best festivals (in the USA anyway), we ran into Hugh Matthews (vocals, guitar) and Drew Schapper (drums) ahead of time, while enjoying an afternoon showcase, and ultimately chatted about Australia, the music scene, here and there and what not.
Anticipation grew, and I now really, really wanted to see them all on stage, including John-Luis Moretti (guitar, vocals), who was touring the convention center, while we chatted away the afternoon. Tellers was rather packed when we arrived to see Dead Leaf Echo playing their set, and only a few more people were fortunate enough to squeeze in when the three from Melbourne started out their set. So much energy. So much talent.
Pretty City are about to release their debut album “Colorize”  by the end of this month and I can’t wait to play it on my turntable, hoping it includes songs from their live set which was… awesome! They deliver all what you expect to see from an indie-rock band, Hugh and John-Luis go  enjoyably wild on their guitars, which makes my guitar-loving heart so happy (apologies to Drew.)
We loved the show so much, that we peeled ourselves out of our beds and hotel room early, to see Pretty City kick-off the Australian BBQ at noon. Sharp. No small feat for band and fans alike. Kudos to Hugh, Drew and John-Luis who were shockingly agile and so much more awake than many in attendance, including me. Which is just short for, they played yet another highly addictive live-set and left quite a few people in awe.
Here’s hope that three will be visiting the USA again soon, because, I want more of the awesome incl. some more of the chat…

(Click on any of the thumbnails to browse through bigger versions.)

Listen to the extra laid-back and super groovy “Flying”: