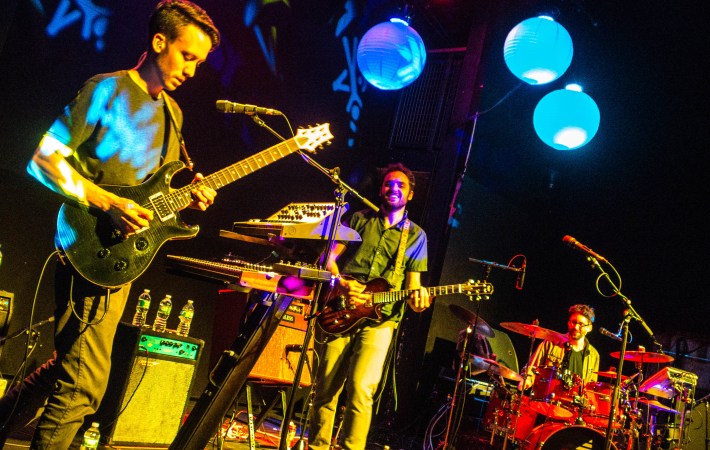 On the heel of their second album “In Motion”, released in February, three-piece Jimkata played a sold-out show at Brooklyn’s Rough Trade NYC to a joyous audience. As much as space allowed, people were dancing, some even putting to test their standard-dance moves. A highly infectious, happy vibe was lingering thick in the air. The three on stage did everything to keep it that way.

Jimkata played old classics as well as new hits, like the super-charming “Wild Ride” from their new album to equally cheerful effects.

Evan Friedell (vocals, guitar), Aaron Gorsch (synths, bass, guitar) and Packy Lunn (drums), the three behind ‘Jimkata’ , have chosen their name after the so-bad-it’s-good 1985 gym-fu caper Gymkata. Together, they found the perfect balance between dreamy yet down-to-earth pop without ever being too sweet or to harsh. This was the perfect live show to a beautiful second album and everybody in attendance had nothing but a wonderful time!

Get the album “In Motions” on iTunes, follow Jimkata on Facebook and listen to “Wild Ride” now: