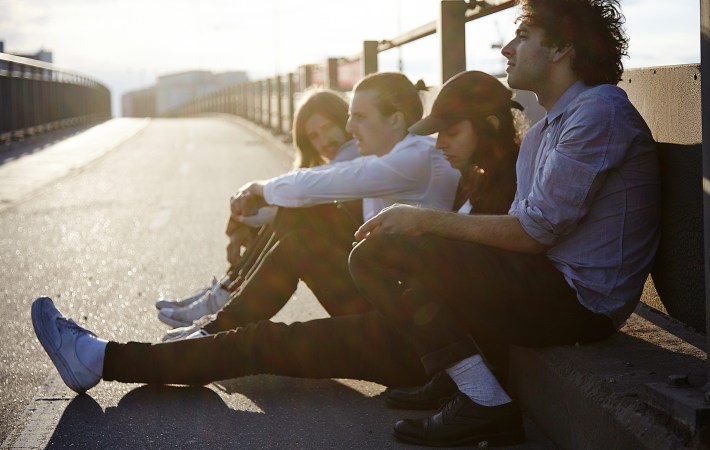 Fred, singer and guitarist for Swedish-British-American quartet FEWS, fills us in the 5 videos that inspired him. I’m totally digging FEWS and am thrilled to…

i’ve chosen 5 videos that makes me feel something. also the songs are fucking ace.

this video with the song is a fucking match in heaven. thom and fukiko takes the song to another level with the dancing. not to mention garth jennings. the song became much better with this video. i love it.

I’m not sure if this is an official video but this song makes me want to move back to berlin. unmortal. makes me want to leave everything in my real life and take the first train. live a really small bedroom, drink the cheapest wine and record songs on my own. watch it and you’ll get what i mean.

it’s not only because i have a huge crush on grimes but i’ve loved this video ever since it came out. i’ve done songs that were inspired by this one. the colors and the esthetic of the whole thing is just beautiful. (claire, if you see this – hit me up)

THE WHISPERS – KEEP ON LOVIN’ ME

this song is so fucking good and the video is beyond everything. every time i see it, i just feel ‘everything’s gonna be alright’. almost like religion for certain people. it heals me and get me pumped.

last but not least the great john maus and his ‘believer’ video. it’s another one that gives me hope. i usually watch this right after a show. to not get myself down since theres loads and loads of color and gets me psyched about life.

Thank you, Fred for sharing these 5 videos and your insights with us. This was as much fun and inspiring as having chatted with you and your band mates back in Austin, TX!

Having signed to Play It Again Sam at the end of last year and on the eve of their imminent debut album MEANS on May 20th, FEWS share the video for their new single 100 Goosebumps.

The video marks the visual debut of new bassist Jay and once more sees director/animator Alden Volney team up with FEWS having directed the video for previous single The Zoo. Shot in a derelict and somewhat dilapidated old asylum in East London, the backdrop accompanies a track that has rapidly proven to be a live favourite with Volney capturing the frenetic dynamics to create a striking video.

Speaking of the video director Alden says:
“I really enjoy working with FEWS. A somewhat improvised affair…. No script, no twist ending or overpopulated set, just the band and a raw energy to translate on-screen in an eerily beautiful backdrop, there’s something about this that just feels right for their soulfully authentic music”

Following a successful UK tour with Spring King, European shows with the Fat White Family and Money plus a string of shows at this year’s SXSW festival, FEWS continue their burgeoning live reputation with a busy summer schedule as follows.

FEWS are a must-see band, catch them live:

27 May – MANCHESTER – Dot to Dot Festival

29 May – NOTTINGHAM – Dot to Dot Festival

FEWS debut album MEANS will be available from May 20th, on CD, limited clear vinyl and download and is available to pre-order now.