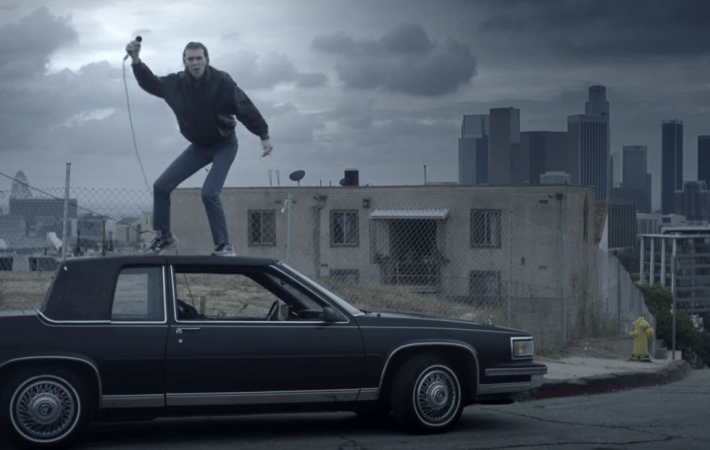 “She’s Mine” is a catchy, instantly likable song and then on top of it comes this feel-good-video, you can’t help but break out into one big smile. When I watched “She’s Mine” for the first time,  I wasn’t sure if Alex Cameron is kinda making fun of 80s bands or if he’s poking fun at uniquely creative artists such as Grimes (look at his dance moves and how he holds the mic) but after having watched the video a few more times it isn’t really a question anymore because… I love it!

“Now is the time to tune in. No hype, no horseshit. Just a hot car, a hot track, and all charges dropped. The video for ‘She’s Mine’ was made by Mr. Jim Pillion. He’s very good at what he does, generally very highly paid. Unfortunately for Jim, Alex dug up some dirt on him that he couldn’t afford to have go public, so when we told Jim he should make a clip for us pro bono he got what we meant. Regardless of the circumstances, he did an incredible job. Really impressive stuff, so we kept what we knew in the dark. Gotta break a couple bones sometimes in this game.”