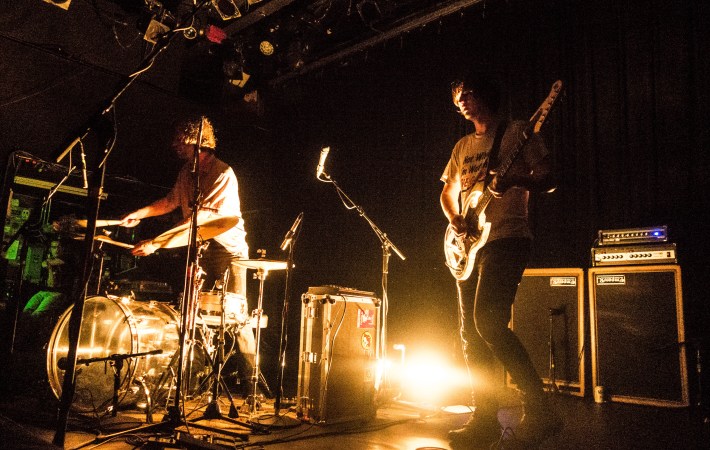 A man. His voice. His guitar. His pedals. And his brother on drums. JEFF the Brotherhood, one of Northside Festival‘s internationally known headliners, got things cooking on Friday night at Music Hall of Williamsburg. As to be expected, the show was as good as sold out and song, after song, the show got more intense, the sound effortlessly drifting from rock with more grunge, to rock with more fuzz to the punk rock side of things.

Once the two brothers, originating from Nashville, TN tapped into punk territory, there was no stopping to the enthusiastic crowd: they began to dance the pogo yet all in good spirits and caring about each other. Nobody got hurt.

To say I truly liked the show is an understatement. I was pretty much blown away by what two people can put on stage, and how much energy there was possible! There were no laptops (at least not visible) and while Jake Orrall surely used the power of modern pedals, and got fans luster after his gorgeous custom plexiglass six string guitar, his brother Jamin had an equally mesmerizing drum set to play with.

Together, they performed a show to remember. In only the best of ways…

–> Click on a photo to enlarge it and to start browsing through the slide show.