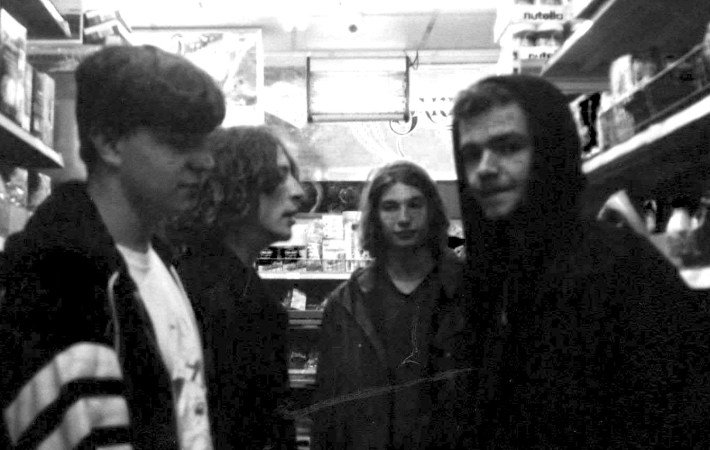 Egyptian Blue are a spiky quartet from England, who play uncompromising indie rock, with lots of reverb and appreciation for psychedelia and punk. So that’s a great mix right there. Egyptian Blue’s songwriting skills are spot on, and together with intriguingly gritty vocals this all makes up for a compelling sound and band. Listen to “High The Hyena” to get an idea:

Well, I wanted to find out more and asked the soon-to-be Brighton band, whether they’d be part of our Offstage series and luckily, they had the time to answer a couple of questions. Thanks Tom, Andy, Luke and Leith! Let’s dive right in:

What was the last song that got stuck in your head?
Probably Sex by Bat-Bike.

Do you have a “go-to song” from your childhood, one you always enjoy hearing again?
On the road again by Canned Heat without a doubt.

What was the first album you have ever bought? And on which medium: digital, vinyl, CD or cassette tape?
I think it was Green by REM.

Is there a song you’d like to cover?
Muffin Man by Frank Zappa but none of us are anywhere near skilled enough to achieve it.

What’s your songwriting process like? What comes first, melody or lyrics?
Usually just a riff or a bass line and the lyrics come with time. That may change though!

If you could have any musical instrument in the world, which one would it be and why?
A harp would be pretty cool. Although I have no idea how to play it!

Playing live, what has been your favorite venue so far? And why?
Probably the Lock Tavern in London because the sound in there is so great and it’s such a compact small venue. It brings the best sweat out of us haha.

What’s the most bizarre thing to happen while you were onstage?
Not that much bizarre stuff has actually happened on stage. We sometimes split our fingers open? I broke some strings once and decided it wasn’t worth it to play on so I watched the rest of the set from the crowd which was weird but it’s good to get that side of perspective from the shows.

If you could choose to live in a decade (music, style, etc.) which one would it be?
Baroque.

Where is the best spot to go to in your hometown? Also, seeing as you guys seem to be a bit spread out, where do you consider to be your hometown?
In Ipswich I’d say Hippy Hill on a sunny day. I’m not sure really. We’re moving down to Brighton later this year so that will be our new home!

This is a truly interesting video to a truly cool song. Watch it!