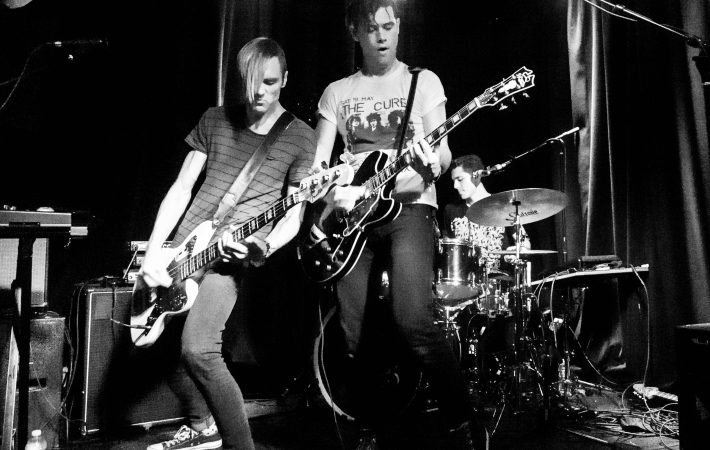 I was absolutely thrilled when I learned that Dreamers would play a one-off show in their old home town New York at the cozy Lower East Side venue BerlinNYC before heading out to play Lollaplaooza on Sunday and then going on tour. Having settled in Los Angeles for now, this iridescent indie-rock trio is filling bigger venues, and is playing in front of bigger crowds of fans and rightfully so! Dreamers themselves go by “cosmic rock” and that’s a cool label, to describe their sound in just two words. It’s not quite “dream rock” and but also not “classic” and something like upbeat indie rock is just too obvious and also too boring.

It’s great fun to see the three live, since not only Nick Wold (vocals, guitar) is singing but Nelson (bass, synth, vocals) and Jacob Wick (drums, vocals) provide backing vocals as well. Dreamers’ first full length album is scheduled to be released on August 26, and goes by the fabulous title “This Album Does Not Exist”, which I am sure they’ll be playing from when touring the U.S., opening for The Mowgli’s.

Enjoy some cool pics from Dreamers’ BerlinNYC gig, simply click on one to make it bigger.

With its anthemic vibe, “Sweet Disaster” reminds me faintly of some of Green Day’s greatest hits. Listen to the irresistibly catchy and joyous “Sweet Disaster” – And so it goes, we found our sweet disaster // In a river of champagne:

To bridge the gap from now and “This Album Does Not Exist”, how about the “Crisis Mode Remix” of “Wolves”? Here it is: