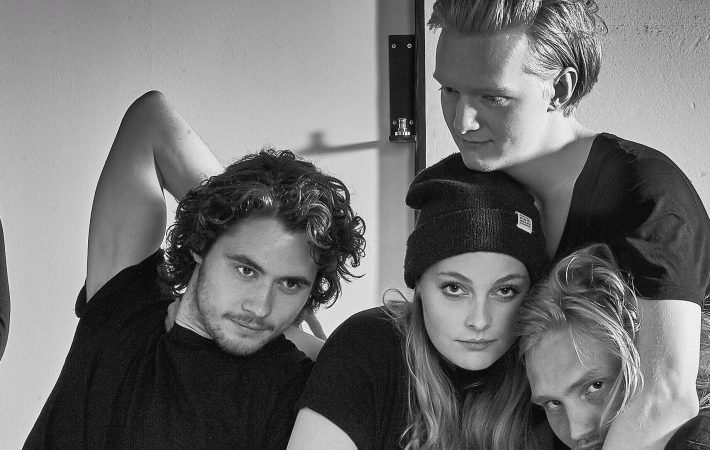 Filed Under: Iceland Airwaves, Q&A with... — By: Elke Nominikat

CeaseTone are an electro-indie-rock band from Reykjavik, Iceland that originated from the solo project of Hafsteinn Þráinsson. I no longer remember how and when exactly I came across their debut album “Two Strangers” which I got instantly enamored with, but when I decided to head to this year’s Iceland Airwaves festival, CeaseTone was the first band I actively sought out and contacted.

Much to my delight, Hafsteinn Þráinsson took the time to take part in our Q&A series. Before we jump right into the Q&A chat, listen to the debut single “Full Circle” to set the mood:

Listening to the entire album, it becomes soon apparent that a master guitar player is behind the alluring songs, and the more surprising is Hafsteinn’s answer in regards to which instrument he chose. Without taking anything further away, let’s dive into the interview:

What was the last song that got stuck in your head?
Roro by Gísli Pálmi

Do you still possess this album?
Amazingly yes, got it when I was 7 years old so 16 years ago.

Is there a song you’d like to cover?
A ton of them, I like taking songs and turning them on their head, picking songs as far from my own style and make them my own, would be pretty cool covering some Kendrick Lamar since he’s my favourite rap act, maybe “Bitch Don’t Kill My Vibe” or “How Much A Dollar Cost”

What’s your songwriting process like? What comes first, melody or lyrics?
It’s quite chaotic and depends on what I’m aiming for sound-wise but usually there is some single idea, rhythm, sound or melodic motif that sparks everything, sometimes it’s like the songs are writing themselves and i finish them in a day and sometimes it takes ages. When it comes to lyrics I usually write them afterwards and they get written in the same way, I’m writing the melody and just start babbling words and write lyrics from the words that sounded good in the melody. In other cases the song in a whole comes from a single sentence that pops up in my head and sometimes I write “poems” that turn into song when I got something burning on my chest…but yes basically it can happen in any way possible

If you could have any musical instrument in the world, which one would it be and why?
An original moog synthesizer from the 1970s would be really neat, I’m mostly a gearhead when it comes to synthesizers though I’m mainly a guitarist, I just don’t find guitars that interesting really, the guitar pedals are way more fun.

Where would you take me to see/hear great live music in Reykjavik? I will be there for Iceland Airwaves ’16 but if I came at another time what would you recommend?
Húrra is always the solid choice since most of the Icelandic music scene plays there and they have gigs almost every night and always something good. Although now they are remaking the Nasa venue and that will probably become a huge part of the scene, it’s a bigger venue though so probably more big acts and less up-and-coming underground stuff from the music scene.

Any misconception that people seem to have about Iceland or Icelandic music that you would like to comment on?
There is this one statistic that keeps popping up in even official media which just baffles me how it became so spread out and that is the “research” that show that half of all Icelanders believe in elves, like for real, and that is just such nonsense and just bugs me because it puts a specific stupid image on Iceland. This whole image also bleeds into the way people think about Icelandic music thinking that all our influences come from nature and all that BS.

If you could choose to live in a decade (music, style, etc.) which one would it be?
The 1970’s had soo much going on, being in the middle of all that would have been awesome..but the 2010’s I also pretty awesome to be a part of with all its diversity

Thanks so much Hafsteinn for your thoughts and your wonderful insights. Honestly, I didn’t even know about the elves and I obviously still have a lot to learn before my trip to Iceland, or better yet not to learn. In any case, I am very much looking forward to seeing all of CeaseTone live: Sólrún Mjöll Kjartansdóttir (drums, drumpad), Steinar Karlsson (bass, synth) Jökull Brynjarsson (synth, sampler, piano) and  Hafsteinn Þráinsson (vocals, guitar, synth). Only two more months!

In “Brighter Nights” is some seriously awesome finger picking going on. So, good. So, beautiful. Listen to it now and get swept away: