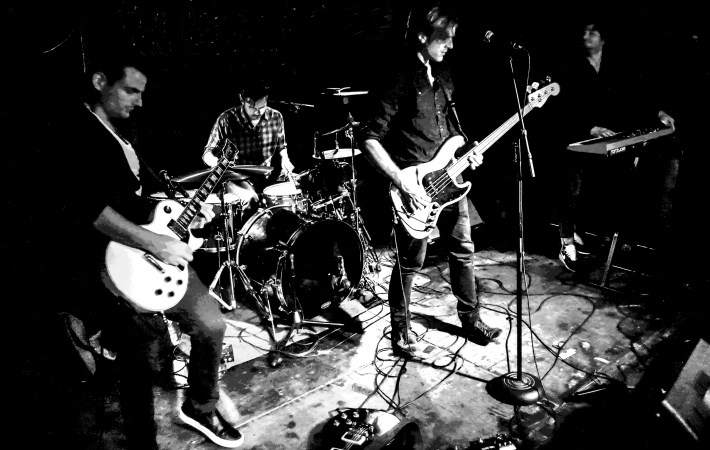 Indie rock quartet The Sleeping Tongues released a twin single today, containing the lively and instantly catchy “Bullet Train” and the beautifully pensive “Careful Fall”. I have known both songs for a while and was looking forward to finally premiering them… today!

Here is a young Brooklyn based band, who allows themselves to explore different styles and while doing so, finding their own.

Listen to “Bullet Train” and find out what insight Craig, The Sleeping Tongue’s frontman, has to offer: “Actually, I wrote the song while traveling in about 30 minutes years ago before the band got together. Never really thought of it again, but I played it randomly during a sound check a few months back and everyone in the band was pretty surprised because obviously it sounds quite different. They liked it though and were like ‘Let’s have fun with that one and do it’.  We really just let the song guide itself rather than try to control it or shape it into something that’s more familiar with us.  It was a fun process.”

Next up is “Careful Fall”, a song that I instantly loved and that I played relentlessly on repeat. I reminded me of some albums I loved to listen to maybe 20 years ago or so and when I told Craig about it, he confirmed it with the following insight: “Been listening to a lot of 90’s California alt/indie rock while developing that song and we wanted ‘Careful Fall’ to be a straight up honest riff/groove-based song without too much contemporary glitz and candy thrown in.” Listen to “Careful Fall” now:

Listen to the tracks on Soundcloud and Spotify and then get the twin single on iTunes for keeps.