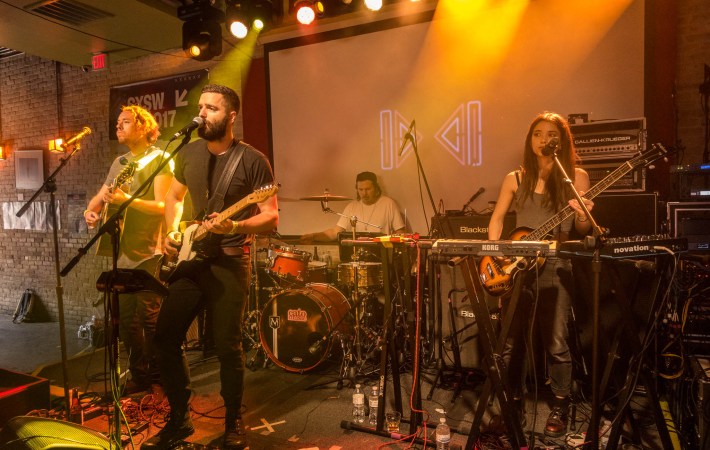 Time to get serious at SXSW (and have some fun too): for breakfast, we went to Rainey Street to see Norwegian producer Coucheron at the Paradigm Talent Agency Cookout. He does catchy energetic dance songs, albeit currently without a live singer.

After that we were caught in surprise by Australian duo Boo Seeka. Their dark, beat-driven pop and unique vocal style puts them in line with acts like Icehouse or Future Island. Brilliant!
We wanted to leave, but it was a beautiful day, so we hung out a while with members of Californian band Frenship, courtesy of Fancy PR. The world is smaller than you think: it was funny to discover that drummer JR also works with CSS, a band whose rise to fame was helped by Fotolog, a company that Elke worked for.

Back downtown, we went to the British Music Embassy for Let’s Eat Grandma. We saw them on a far bigger stage at Iceland Airwaves, but their show works in a small venue just as well. They are the talk of the town and everybody is curious where they go next.

Also on our must-see list was Mt. Wolf, the U.K. electro-folk three-piece who put out some of the most exiting music last year. They also put on a great show and Bassi Fox can indeed sing the whole vocal range live.

Back at the convention center the programming on the Day stages started. On the International stage I caught a song by Australian producer Woodes, who sounded absolutely great.

Meanwhile at the other stage, UK four-piece Temples were on. We saw them at the same place three years ago – they have come a long way since then.
We were in the mood for a (relatively) quiet dinner after that, but where? Two hours waiting time at Stubb’s. The restaurant of the Indigo Hotel at Red River had dirty dishes piling on the table. The bar of the Omni Hotel was our rescue and we even witnessed something that looked like an initial contract negotiation between a label and an artist.

First show of the evening was the SXSW debut of Brooklyn singer/producer Mothica at ScratcHouse. We follow her since her first show and were delighted to see her on the festival stage stage, where she played new material from her upcoming second EP.

Next on were our long time friends Dead Leaf Echo whose massive mix of shoegaze and punk rock hit us like a wall when entering Iron Bear Bar. The release of their new material is something to look forward to.

They were followed by Sexores a Ecuadorian/Spanish three piece around singer/guitarist Emilia Bahamonde, who play a dreamier, hazy brand of shoegaze. We were happy to see them again after their show at Northside two years ago.

Our last show of the evening was Lilly Among Clouds who hails from my old hometown Würzburg, Germany. She played the Speakeasy Kabaret, a fitting venue for the late hour. She does catchy, intelligent pop songs with powerful vocals. It looks like something exciting is happening in the Germany music scene.