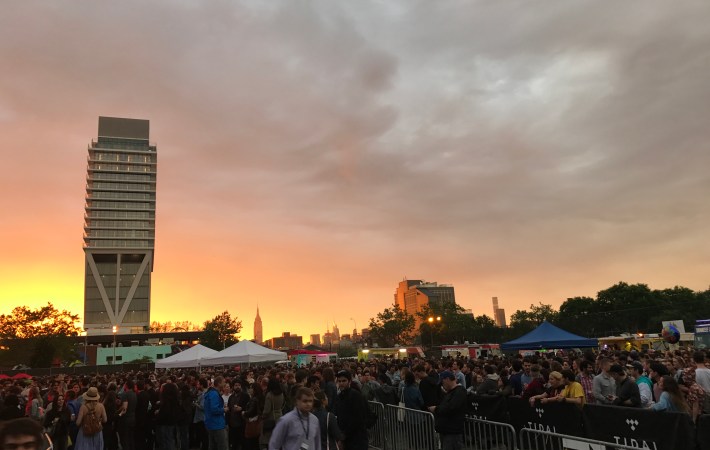 Since 2009, summer in Brooklyn starts with the Northside Festival. Literally this year: after a long gruesome streak of rain and coldness it seems that the sun is finally out for the the weekend. But even with the chillier temperatures on Thursday, the festival got off to a hot start: at the big stage in McCarren Park Kamasi Washington and Dirty Projectors were playing, two acts that topped many must-see lists. Opening for them was Jay Som, of whom I only caught a glimpse after hearing her music while standing in line. After her, Kamasi Washington, a saxophone player, composer and sought-after collaborator was playing with a six piece band. At glamglare, we rarely come across jazz concerts, so this was a special treat. Together with a fiery sunset behind the Manhattan skyline, a memorable New York Moment came together.

That magical sunset gave a romantic backdrop on our way to Rough Trade to see experimental guitarist Noveller, whose lastest album is fittingly called “A Pink Sunset for No One”. The title serves also as a good description for her music: with a guitar, loop and effect pedals, she creates bright soundscapes that blur the lines between electronic and rock music.

Next stop was Union Pool for She-Devils. The duo from Montreal, Canada does an industrial-punk brand of electronic music with a no-nonsense performance, which reminded me of Wall, who we saw at last year’s Northside. Singer Audrey Ann takes on a fierce, futuristic persona with such intensity on stage that it almost comes as a surprise how charming she is in real life. That is great artistry in my book.

Capping off the night was a visit at Sunnyvale, where we missed the live set of Ciarra Black, who fortunately stayed around and – hidden behind a thick cloak of fog – spun some heavy techno that kept us awake until 2 am.