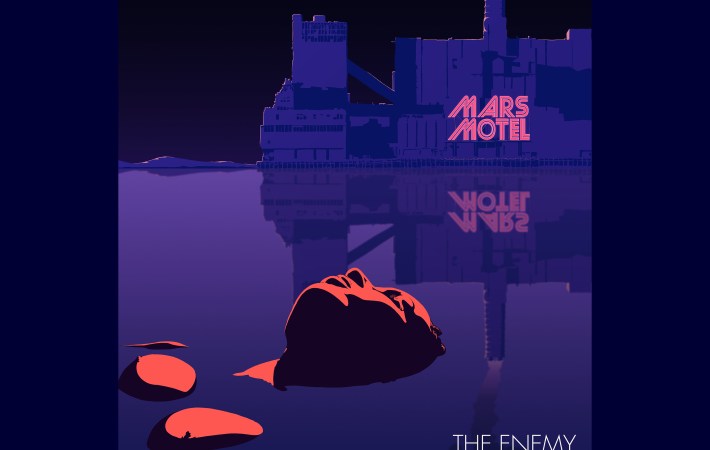 We are stoked to exclusively premiere “The Enemy”, the debut single by Brooklyn indie rockers Mars Motel. Fans of sophisticated alt pop might know frontman Sarik Kumar as one of the members of dream pop trio Twin Wave. In Mars Motel, Sarik Kumar adds song writing and vocal skills to his guitar chops, and rounds his new project out with Wesley Wynne on guitar, Jordan Lipp on drums and Justin Lieberthal on bass.

“The Enemy” is an energetic and instantly intriguing track with a catchy urgency expressed in its pulsating rhythm and playful guitar work. Sarik Kumar’s soft and mellow vocals lend the song a warm touch and stand in fascinating contrast to the track’s fast pace. Lyrically, “The Enemy” addresses our society’s obsession with social media and the loss of ever truly being reflective and alone, comparable to the intangible force watching over every move we make like in George Orwell’s classic “1984”.

“To take this concept a bit further, I wanted the listener to not only acknowledge the presence of this force, but also address that many people, because of technological advancements, find some sort of comfort in never truly being alone, broadcasting their daily activities for the world to see and respond to. This concept is labeled as “The Enemy” and can be seen as a sort of “Black Mirror” allusion where one finds a sense of comfort and company being watched and viewed, instead of living through life’s natural moments of solitude. As the pre-chorus goes: The Enemy will be your friend when your alone // The Enemy will take hold of you, when its your time of end.”

Immerse yourself in these thoughts now and listen to the superb “The Enemy”, our Song Pick of the Day”, and exclusive premiere:

Music and lyrics written by Sarik Kumar and produced by Tommy Eichmann (Twin Wave) @ Mission Sound in Williamsburg, Brooklyn. Find “The Enemy” on all music platforms on 07/12/17.