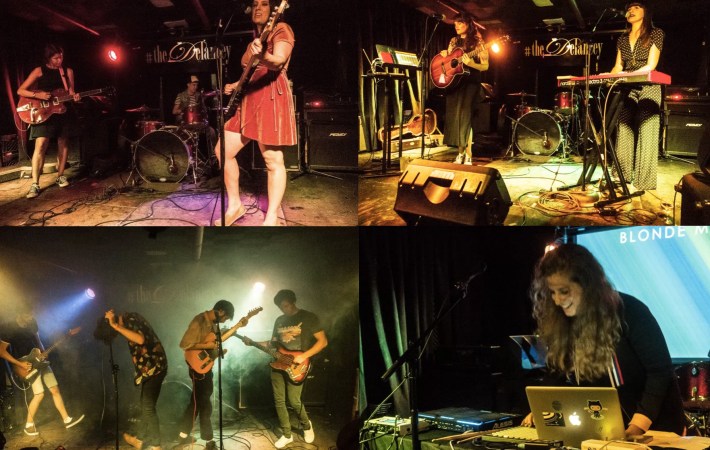 What a fantastic night! One band making their USA debut. Two bands making their The Delancey debut, and one act was headlining a glamglare showcase for the second time in only one year. The lineup was exciting enough to lure out old and new fans alike on one of the hottest nights of the year, and the venue was nicely packed with music lovers who visibly enjoyed what they were experiencing.

First up was Brooklyn-based trio FlirtClub who haven’t been making music for too long yet but delight with their infectious way of performing (fun) punk classics and their own material with instant sing-along appeal.

Also riding on a joyful wave but a quieter, more introspect one were Cameo Bell an Irish-American indie-electronic duo based in London and New York. Jenny Judge and Triona O’ Neill for sure mesmerized the audience and the highlight of their beautiful set might have very well been the Whitney Houston cover, which just made us all gasp in awe.

Providing our import a special spot in our illustrious lineup, BOYS from the U.K. were taking the stage next. And they made it theirs! The energy and joy with which the five chaps from London were playing their alluring surf-rock inspired indie rock was infectious. Thrilled for having hosted them first!

Rounding out the evening was Blonde Maze, who we simply can not get enough of! Armed with only her laptop, launchpad, a mic and her beautiful vocals, Amanda Steckler who goes by Blonde Maze, understands to captivate audiences.

Big THANKS to all performers and everybody who came out that Friday night.

Click on a thumbnail to browse through the gallery:

Our next showcase is on September, 16th at The Delancey. For more info, click HERE.

Listen to the songs of the performing artists and discover new favorites: