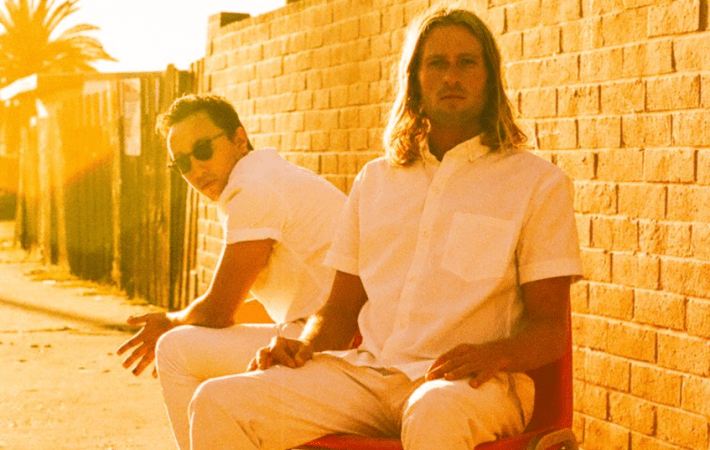 In July 2016, I heard about The Lulls for the very first time and was immediately taken by their laid back, intelligent but also delicate sound. We premiered “Bruise”, the first single from their debut album “Island of Daughters, and at some point, Rutger Rosenborg and Ryan Miller mentioned that they would go on a road trip from their home base San Diego, California to New York and back. Little did we know that their show in New York would kick-start the glamglare showcase series.

Envisioning the lineup for our Official SXSW 2018 showcase, we instantly thought of our progressive soft rock friends, and are overjoyed to have Ryan and Rutger aka The Lulls on the bill, who are joined live by Max Idas.

And so it seems only fitting to start our SXSW 2018 feature series with Rutger and Ryan, thanks for your time!

Q: You are driving from San Diego, California to Austin Texas, which are your 3 must-listen-to road trip songs?
“Africa” by Toto, “We Dem Boyz” by Wiz Khalifa, “Graceland” by Paul Simon.

Q: When your band mate takes the wheel, what would be the video you’d like to watch while on the road?
Probably some Curb Your Enthusiasm, to keep things light.

Q: What are you looking forward to doing in Austin, Texas?
Floating down the river and eating some good BBQ.

Q: Which of the already announced acts for SXSW 2018 do you really want to see?
A few that we’re hoping to catch are: Post animal, Mint Field, SEND MEDICINE, Palm, the Britanys. We also hope to see our friends The Gloomies, Half Stack, and Plastic Picnic.

Q: SXSW 2018 being a festival AND a conference, have you checked out the daytime panels and workshops yet and maybe marked them in your calendar?
We’ve honestly been so busy prepping for recording and playing shows in New York and Austin, that we haven’t had time to check out the conference side of things yet. But it’s definitely on our calendar to mark our calendar.

Q: Will you play a song at your SXSW showcase, that you have never played to an audience before?
Basically, our whole set is composed of songs that an audience has never heard before, so we’re both anxious and excited about it.

Q: You’ve been on a road trip to New York in 2016, were back in 2017 both times to play Mondo.NYC plus the very first glamglare show, and also will be there shortly before SXSW 2018. I know what makes New York so special. What is your take?
It’s the last truly American city: diverse, culturally vibrant, artistically adventurous and (at least ostensibly) free.

Q: And what do you like about New York the most?
You’re never bored there—inspirationally, culturally and emotionally.

Q: Do you have time for non-music related hobbies? What would that be?
Being in a band is like having two full-time jobs (and one of them you don’t get paid for), so it’s hard to find time for hobbies. When we do find spare moments though, we either exercise, explore other artistic mediums—photography, poetry, etc.—, surf and skateboard, or spend them with our families.

Q: If you could choose to live in a decade (music, style, etc.) which one would it be?
Probably the Baroque period. The wardrobe and musical brilliance are unmatched.

Thanks so much, Rutger and Ryan. New material? How awesome! Looking forward to seeing you again next week in New York, when you take the stage at Berlin on March 2nd. Then, only a little over a week later, again in Austin, when you play the glamglare Official SXSW 2018 Showcase at The Iron Bear.

Until then, we can luckily enjoy The Lulls online:

Listen to Island of Daughters on Spotify: