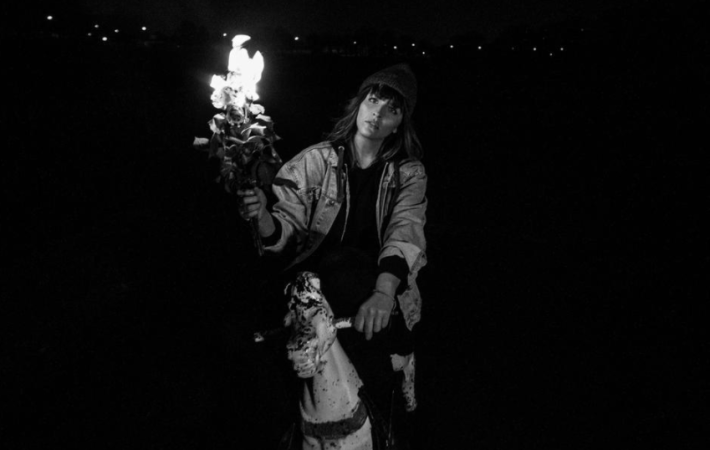 With six acts on our Official SXSW Showcase, only one will be absolutely new to us: the fabulous Emme Woods, who is making the trip over the pond from Glasgow, Scotland together with her four band members Jamie Logie (guitar),
Neil McKenzie (trumpet, bass), Katie Doyle (keys) and Gary Gilmour (drums). Listening to Emme Woods’ music, communicating with her, and now savoring her lively answers to our questions, I get goose bumps and can not wait to met her!

For now, Emme Woods has only a few tracks released but there is much more in the making, and the ones we can actually already listen to are crazy charming indie rock ear worms. Get a taste by listening to “I’ve Been Running” while reading through the interview:

Q: On a long flight, what takes your fancy most: sleep, music, movies or something else entirely?
Before the plane leaves the run way, I am normally out like a light. I love it because I cannot handle being still for so long unless I am sleeping and the plane food smells vile. If I’m on a plane, my only requirements is that I be sleeping or drunk. Or both.

Q: As for music, which album or playlist must always be on your phone/iPod?
Pet Sounds by the Beach Boys. I have a unreal amount of love for Brian Wilson. I remember touring in Spain and this was literally my soundtrack for the whole trip. I was so unsociable, I walked around the whole time with Brian on repeat.

Q: You have been to the United States before, California if we are not mistaken. Is there anything specific you are looking forward to? Any specific food maybe?
Yes I was over for some shows in LA in December and New York last July. The food was banging but I was most looking forward to the sun. It’s pretty wet and miserable for most of the year here in Scotland so some sun was fabulous. A bit of heat in my bones, topping up my good vibes and vitamin D got me through the winter. My auntie stays in Florida so I used to visit the states a lot when I was a kid, I’d go once or twice a year. I loved it.

Q: You played The Great Escape in Brighton last year, which is from what we have heard comparable to SXSW in the sense that musicians play in many different venues and clubs. Where did you play?
I played a few different shows. I played the Scottish Showcase alongside some other amazing bands from Scotland like The Van T’s and Spinning Coin, who are actually showcasing at SX this year too. We played in a hotel which was interesting but the show was fantastic then we played the BBC 6 Music stage which was outside and on the main strip in the heart of the festival. That was a really fun show. We ended up getting heckled by this drunk Scottish dude that now lived down in Brighton. It was all fun and games til he got a little rude but he left embarrassed because my banter was top notch that night.

Q: You are from Scotland, and Glasgow is the biggest city near your hometown, correct? I have been to Glasgow in 1989 and went to see The Mighty Lemon Drops at a place called Barrowlands, now Barroland Ballroom. Have you seen a show there or even played one?
Ye, I actually live in Glasgow now. The Barrowlands is amazing, it might actually be my favourite venue in Scotland. I saw Haim play there and the show was unreal. I actually went home with one of Alana’s picks. What a belter.

Q: Which of the already announced acts for SXSW 2018 do you want to see?
So many insane acts that I was already a big fan of. If my schedule permits, I’ll definitely be along to see Ezra Furman, Pussy Riot (yassss), Anna Burch, Flyte, Molly Burch and Sunflower Bean. Too many, I wish I could name more but I literally don’t think I’d have time in the month to see them all, never mind the week.

Q: Will you play a song at your SXSW show, that you have never played to an audience before?
Yes but it’s a secret, we have been working on something a little special.

Q. Any plans to visit New York?
I’d absolutely love to get back to NY. The people I met last time were wonderful and the place I stayed had a three tier outside terrace on their roof that you could go outside and have BBQ’s and sunbathe. I did also burn it down on the 4th of July, partying a little too hard but I’m still alive and so is the terrace, so I think it was a successful trip. My friend Stephanie has been running a music collective in NY where she moved to from Scotland so I’m hoping to get back sooner rather than later. I also went to this place that sold seitan avocado fried rice, so if anything, I’ll be back just for that. Fun fun fun in the big apple.

Q: What’s your favorite non-music related to a hobby?
I grew up with horses so I find that quite relaxing. I normally head out on the horse with my dog Bubbles in my jacket. She loves the wind in her hair and the fact that she is finally taller than everyone else. She’s an absolute queen with a small dog complex but queen non the less.

Q: Are you a night owl?
Yes, most of my creativity and energy come at night time. I love the moon so it’s a wonderful time to be awake but it’s not too great to sleep all day. I like to cycle at night when it feels like I’m the only one awake in the world. Glasgow isn’t really like NY. Bars close at 3am, the casino is open til 6 but all public transport stops like 11 or 12 at night. Except the night bus… and it’s not really the place you want to be at 3am. You know you’ve had a rough night when you end up on the night bus and 90% of the time, it’s gonna get worse. Moral of the story, don’t get on the night bus. Uber or after party. After party is always best option.

Q: If you could choose to live in a decade (music, style, etc.) which one would it be?
Definitely the 60’s. Yes yes, all things 60’s. Mainly for the music. I think that was a magical period for music and maybe just life in general. The Beach Boys, Fleetwood Mac, The Stones, The Beatles… I don’t think there was a better time to be alive.

Thank you very much Emme for taking the time to answer our questions, for your sassy and highly appealing music, and for taking the stage on March 14th at The Iron Bear, in Austin, TX. I am sure, all in attendance will have a fabulous time. I certainly will.

Listen to Emme Woods on Spotify…

… and get some visuals here: