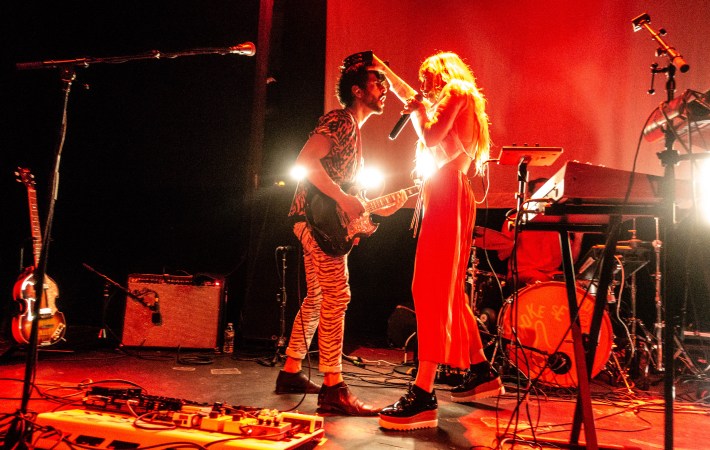 In our era of having the world on our finger tips via smart phones’ intelligence, it is no longer easy to get utterly surprised yet exactly that happened to me and probably some others in attendance.

Without having heard a single song of Los Angeles-based duo Smoke Season, I found myself on a Monday evening at Brooklyn’s Rough Trade and charmed from the very first to the very last-minute! I knew that the duo would play “Electro Soul with a shot of whiskey” as per their own labeling and that was all I needed to know. The treat I’d be in though, I didn’t know. What Gaby Bianco (vocals, analog & digital keys, industrial light design) and Jason Rosen (guitars, vocals) together with their touring drummer put on stage was a feast for eyes and ears.

Among the many amazing songs, “Sweetest Thing” is the one that still lingers: a little bit of reggae rhythms, a little bit of carefreeness, and a ton of feel-good. This could easily become one of the top hits of this Summer!

While editing the photos of the show, some idea formed itself as to what their live performance reminded me of. The starting point was catchy music, that made you want for more. There was also a little bit of teasing and lots of passion. All presented with great skill and talent.

In essence, seeing Smoke Season live is like being mesmerized by a couple dancing the tango, with its push and pull, and all wrapped in one big sensual expression. Bravo!

Flip through the photos and get an idea of how amazing and special a live show of Smoke Season is:

All concert photos by glamglare.com – © 2017 Elke Nominikat and Oliver Bouchard