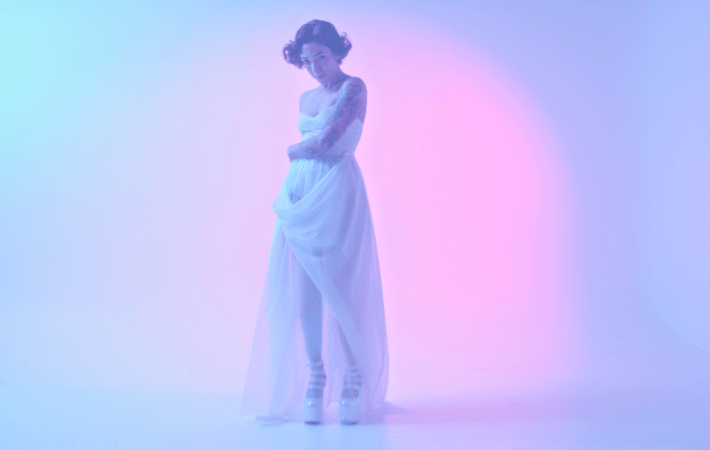 A couple of months ago we were accidentally treated to an early edit of “Cheetos and Champagne” at Chris Butler’s studio in Bushwick, and I was like, holy cow, this is good! Today, we are delighted to premiere this track by New York singer/songwriter Ana Moreno aka La Moreno .

I wrote Cheetos and Champagne to recall the finer, sophisticated things in life like Lobster and Mountain Dew, Caviar and Empanadas. In the summer of 2013 in Brooklyn, our days began and ended dancing ’til our feet burned and we walked home barefoot to open the fire hydrants with the kids on our block. Our budget was spent on clothes+drinks+expensivesugar, leaving us eating cup noodles for the rest of the year. I’ve never been so broke in my entire life but never felt richer-you may be a Cheeto but there is no reason you cannot feel like Champagne!

It could have been a nice piece of summer bubble gum pop, but Ana chose a wide collection of electronic sounds that seem to develop their own life throughout the song. It is her rich vocals which keep the song grounded and human. Listen, rewind and listen again, and follow Ana on this exhilarating ride.

Watch the sleek and stylish video for „Cheetos & Champagne“:

Listen to brilliant track on SoundCloud or Spotify: