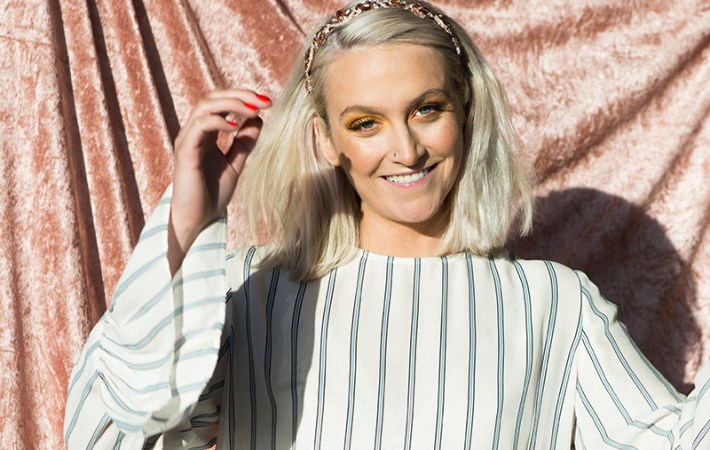 Filed Under: Iceland Airwaves, Q&A with... — By: Oliver Bouchard

During our first Airwaves experience two years ago, it took a few days to become acclimatized with the unique vibe of the festival. But by Saturday, we had it down and ventured out to Bryggjan Brugghús, a micro brewery and brunch joint to see Hildur. It was an experience you will find only at Airwaves: a casual crowd of all ages hanging out and listen to world-class music performed on a small stage.

This year we know better and look out for events like this. And of course we will not miss Hildur’s show, who just released another bright synth-pop gem with “Picture Perfect”. She also gave us some background to her music and tips about having a good time in Reykjavík, during Airwaves and at other times.

Q: What was the first album you have ever bought? Digital, vinyl, CD or cassette tape?
A: When I was a kid I would always “order” albums as a gift when my dad went abroad. He would always deliver just what I’d ask on handwritten note I’d given him. I think my very first was either the first Spice Girls album or a Celine Dion album, which came first – the diva or the girl power? Can’t remember but I loved both of them endlessly and knew every word.

Q: Do you still possess this album?
A: Yeah I think they actually are in a box with all my old CD’s that I really don’t know what to do with. I actually tried to listen to the Spice Girls album in the car a few years back but it was so scratched you couldn’t even get through a song!

Q: At what age did you see your first live show/ concert? And who was it?
A: Good question. I used to go to different classical shows when I was young as I was studying the cello but I guess the first real big concert I can remember is Foo Fighters when they came to Iceland and I was like 15. I was a huge fan and actually waited outside the record store from 6 am to get tickets.

Q: Is there a song you’d like to cover?
A: I haven’t been doing any covers lately but my favorite covers are the one’s you don’t expect. I think I would do an 80s rock song or a hip hop song – something people would think is out of my music’s character.

Q: What’s your songwriting process like? What comes first, melody or lyrics?

A:I don’t really have a special process. The songs come as differently as they sound different. A lot of times I get lyric or melody ideas very randomly when I’m not trying to write – like when I’m driving or walking my dog and then I always make sure to write them down or record a voice memo in my phone so I can turn them into something when I get the chance to sit at the computer. I write most my songs in the computer at home with a small keyboard. I’m minimalistic when it comes to writing style, I can do whatever with very little equipment.

Q: The first festival announcements for Iceland Airwaves 2018 have been made. Whom are you looking forward to see?
A:  I’m really excited to see Alma from Finland. I love her songs and she’ just such a cool personality. I’m also gonna make sure I catch Blood Orange, Jade Bird and Kat Frankie. But honestly, in the last few years I always end up seeing mostly Icelandic acts because we have so many good acts and the Icelandic artists always treat Iceland Airwaves as the highlight of the year – so they put all their efforts in making a good show.

Q: There is music day and night during Iceland Airwaves. What is your top one non-music related recommendation to do/to see while in Reykjavík?
A: Go to the outside swimming pools! Vesturbæjarlaug is my all time favorite. Relax in the hot tubs and steam bath and let the festival hangover run out of you. Don’t let the cold weather outside frighten you away from the pools, they are all heated with hotspring water so they are the most relaxing thing you can actually do in a cold weather. I do it least 2x a week.

Q: Where can you get a tasty and affordable meal in Reykjavik?
A: “Ein með öllu” is the traditional Icelandic hot dog and it’s also one of the cheapest bite you can get. Go to Bæjarins Bestu hot dog stand near Harpa for the best of the best.

Q: We loved your set at the Bryggjan Brugghús during Iceland Airwaves 2016.  Will you have a similar setup or what can we look forward to?
A: Thank you! My band has grown so now we are 3 on stage. You can expect the same energy but a lot of new songs which make me very happy – so I predict you catch a happy me performing songs I can’t wait to share with the world!

Q: If you could have any musical instrument in the world, which one would it be and why?
A: A few years back my biggest wish was to get a japanese koto harp. I posted a video of myself trying that out and to my surprise a few hours later I had been promised a Koto harp to be delivered to my house. At that time I lived in Tokyo and my friends’ mother had one she wasn’t using. I was so very grateful and I played it a lot while I lived in Japan, but sadly it’s still there, I didn’t manage to bring it back home at that time but it’s still awaiting me in a storage in Tokyo, one day I’ll go back to bring it home!

Q: If you could choose to live in a decade (music, style, etc.) which one would it be?
A: I love this decade right now. Everything is allowed and the technology has made the possibilities endless. But if I could try something else for a week, I would try the 60s, motown and such – I would just love to see and experience the times where everything was recorded live, everyone together in one room. There’s some magic there!

Thank you, Hildur! We definitely practice to pronounce “Ein með öllu” and have some hotdogs. See you at Airwaves!

Connect with Hildur on Facebook, Instagram and add Hildur’s brand new single “Picture Perfect” to your playlist on Spotify: