Photos and Impressions of Iceland Airwaves 2019

Photos and Impressions of Iceland Airwaves 2019

Every early November and now in its 21st year, Iceland Airwaves attracts a good 150 musicians to play the festival and more than 6,000 concert goers who want to see these acts perform in Reykjavik. The festival takes the Keychange commitment seriously in ensuring a noticeable gender balance. This being Reykjavik’s party, the performing acts hail from the island as well as mostly European countries (see the exact line-up here).

Living in New York, we experience no shortage of fine bands making the city their concert destination or rolling through while on tour. And let us not forget about the sheer abundance of talent that lives in the city! Nevertheless, an intimate festival like Iceland Airwaves is highly appealing to even the most jaded New Yorker, as it features exciting Icelandic bands, some big name international head liners as well as up-and-coming bands that are not yet making the leap all the way over the Atlantic.

This having been our third Airwaves, we certainly have our local favorites. Sadly though, we again (!) missed Vök performing in their home country, as they played the big Valshöllín outside the city. Same evening performed also Brighton dream rockers Penelope Isles on the big stage of the Reykjavik Art Museum and since we are totally smitten by the sibling led four-piece (as you can tell by our Q&A), we stayed put in town. 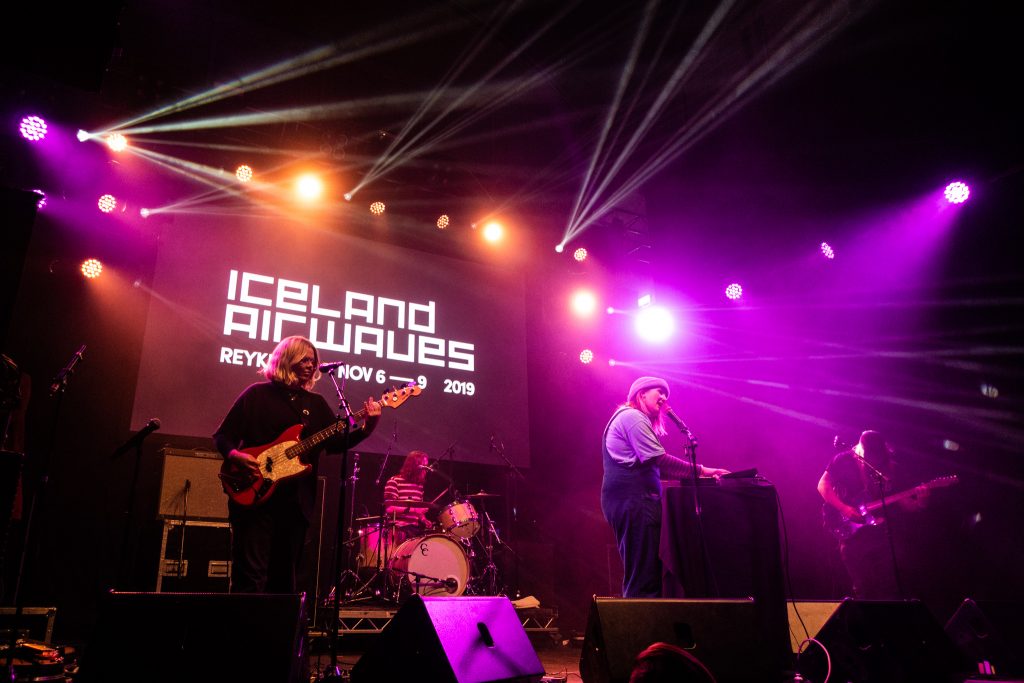 Little later that same evening, at the intimate stage of the rock club Gaukurinn, Manchester-based art rockers W.H. Lung kept the audience on their toes and we were excited to finally see them live as we have been following their career from the start. (Check out our Q&A here.) 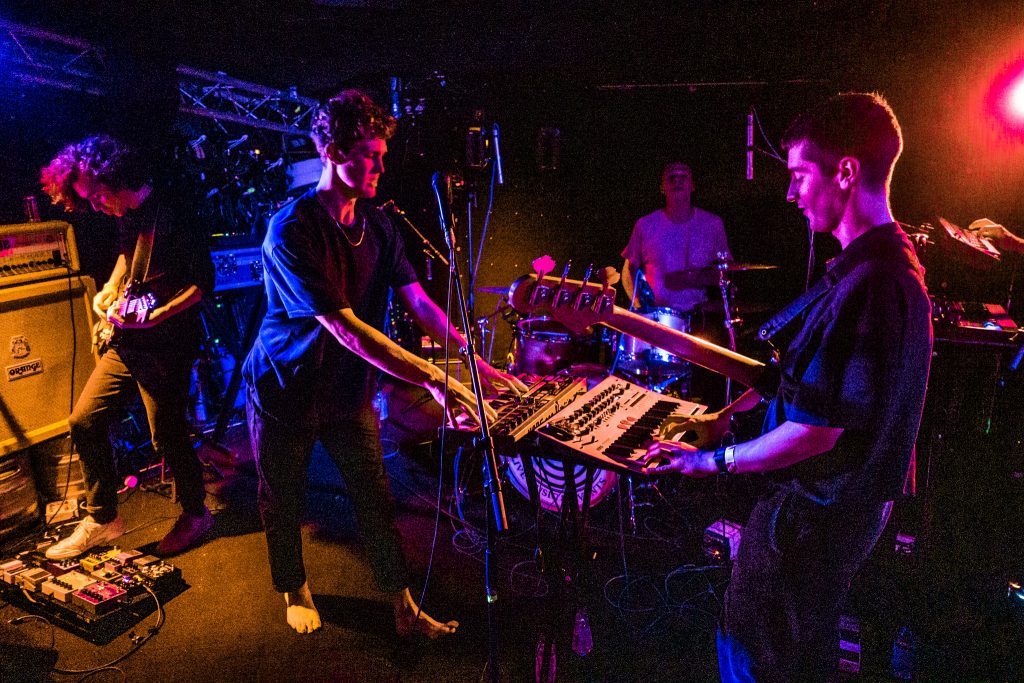 At some point during her set, JFDR revealed that this year marked her tenth Airwaves anniversary (she started when she was only 15 years old). Hildur declared this first week in November “her favorite time of the year.” Singer/songwriter and acclaimed actress Elín Hall was overjoyed that she got invited to the big stage at Iðnó for the first time, after years being relegated to off-venues. They all seem to love and respect the festival.

Even the big names in Icelandic music like to make an appearance. This year it was Of Monsters And Men and last year Ólafur Arnalds. In 2016 Icelandic icon Björk showed up, albeit for a separately ticketed show. International stars are probably too expensive for the festival to participate more often, but the focus on younger, up-and-coming artists is a big part of the appeal of Airwaves.

Jófríður Ákadóttir aka JFDR is blessed with a radiance and voice that you probably would enjoy listening to her even if she was not such a talented songwriter and musician. We missed her full show at Gamla Bïo but we saw her twice with a stripped down set, which did not include her latest song “Taking A Part of Me” as it is probably hard to play on an electric guitar. 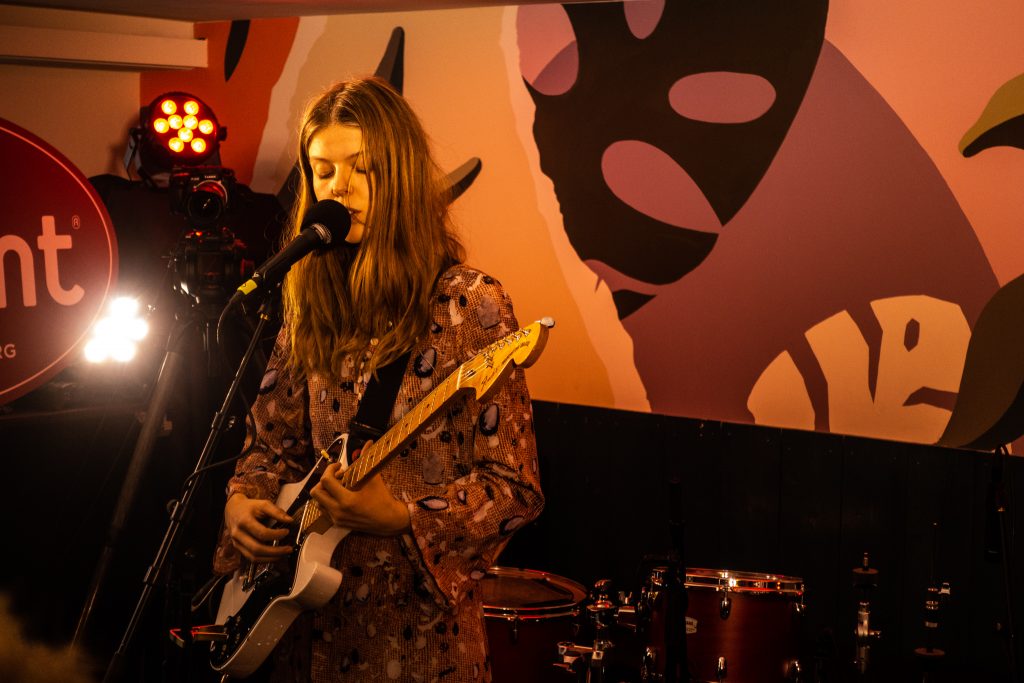 What Shame put on at Gamla Bió was modern punk at its best. While Josh Finerty faught with his bass strap and the band technician did his best to keep up with the relentlessly moving bassist to get it fixed, singer Charlie Steen and the other band mates seemed unphazed and did their own show, while the front rows of the audience broke out into pogo which could compete with any 70s styles yet the vibe was overall joyful and fun. This is a band that is as fantastic live as their recorded material! 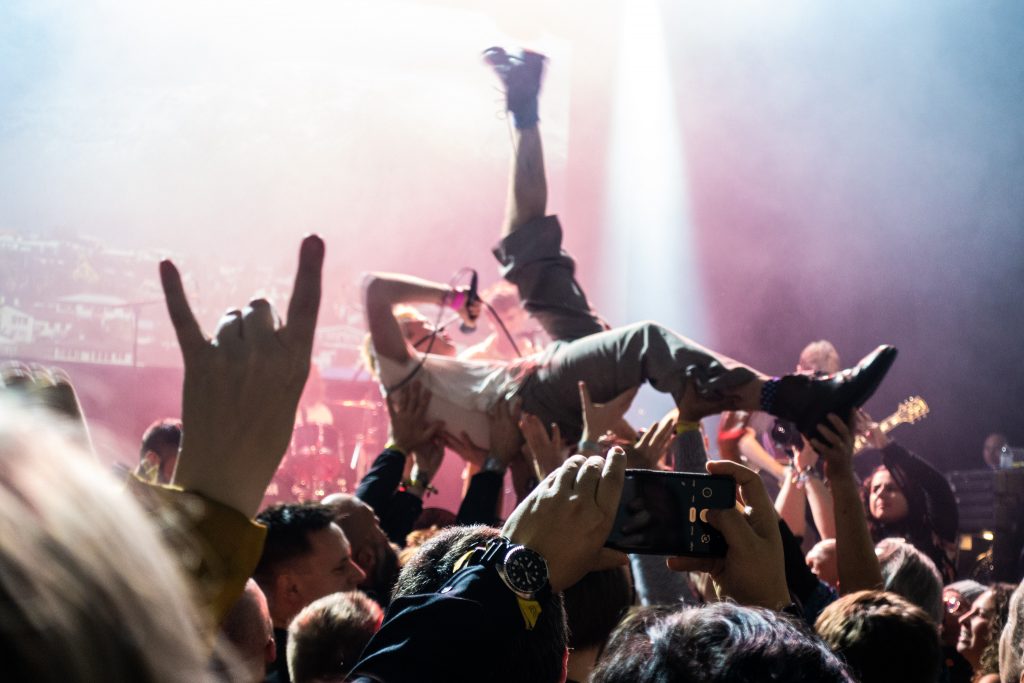 Someone who can easily keep up with the aforementioned U.K. bands and who is always great fun to see live is Iceland’s very own Berndsen, who managed to pack the beautiful Iðnó for his 1:30am performance. He kept us dancing despite some serious jet lag and foot pain because, when in Iceland enjoy great music to the fullest! 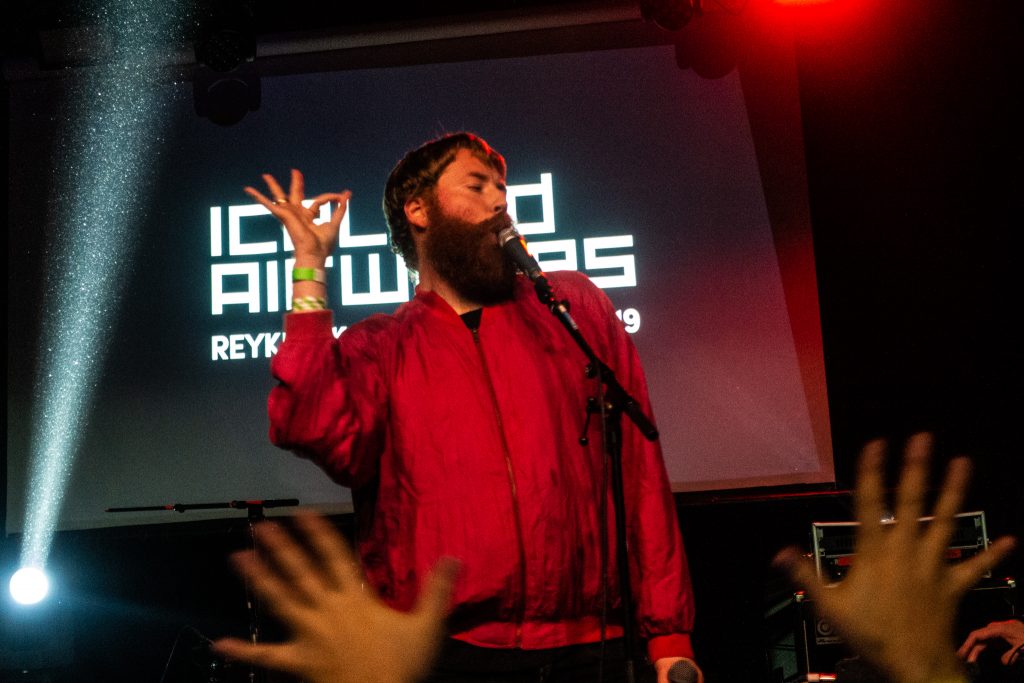 Millie Turner was a late addition to the lineup courtesy of AWAL. At glamglare we have loved every song she has put out in the last two years and we were delighted to see her finally live. She did not disappoint: her show was a demonstration on how modern pop music should be presented on stage: engaging, self-confident and friendly without genre-typical cliches. 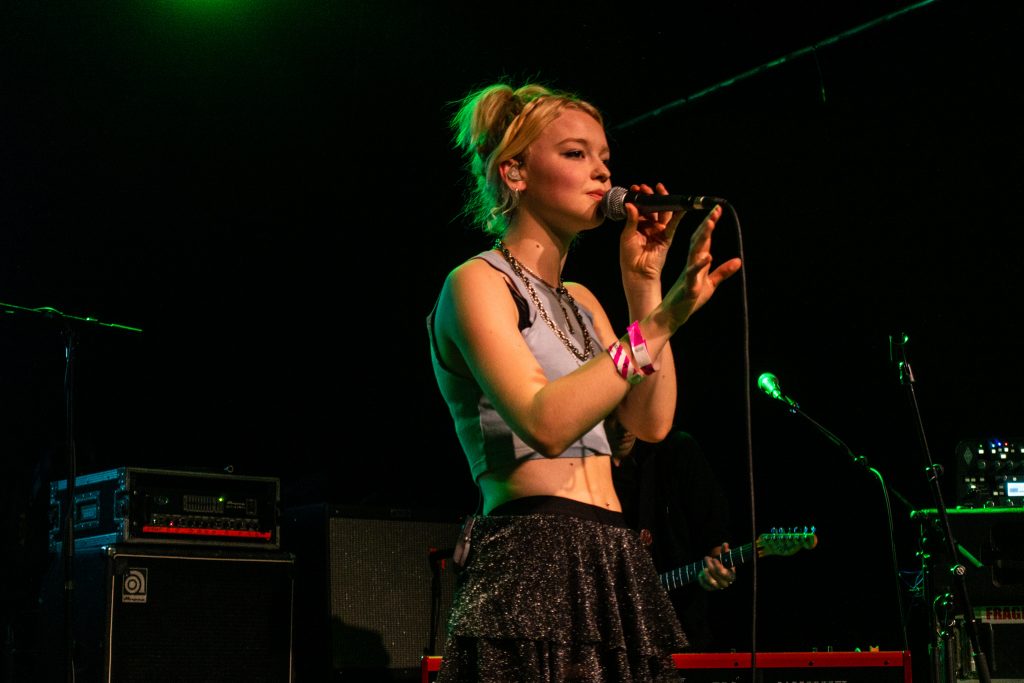 Danish singer and producer Lydmor came down like an alien force to Airwaves on the last evening. The music, the lightshow and her outfit with fluorescent body paint felt like coming straight from a science-fiction movie and drove the audience at Hressingarskalinn crazy.

A less alien but not any less powerful performer is London-based artist Georgia, who got the huge concert hall at the Art Museum rocking out thanks to her passionate solo performance. Georgia did not hide behind her enormous custom drum kit but made contact with her fans close at stage throughout her energetic set. She also had the perfect inspirational story to tell, when revealing that she stood at that very same stage six years ago as the session drummer for Kwes and dreamed of playing the venue herself one day. Dreams do come true with the right talent, hard work and personality. 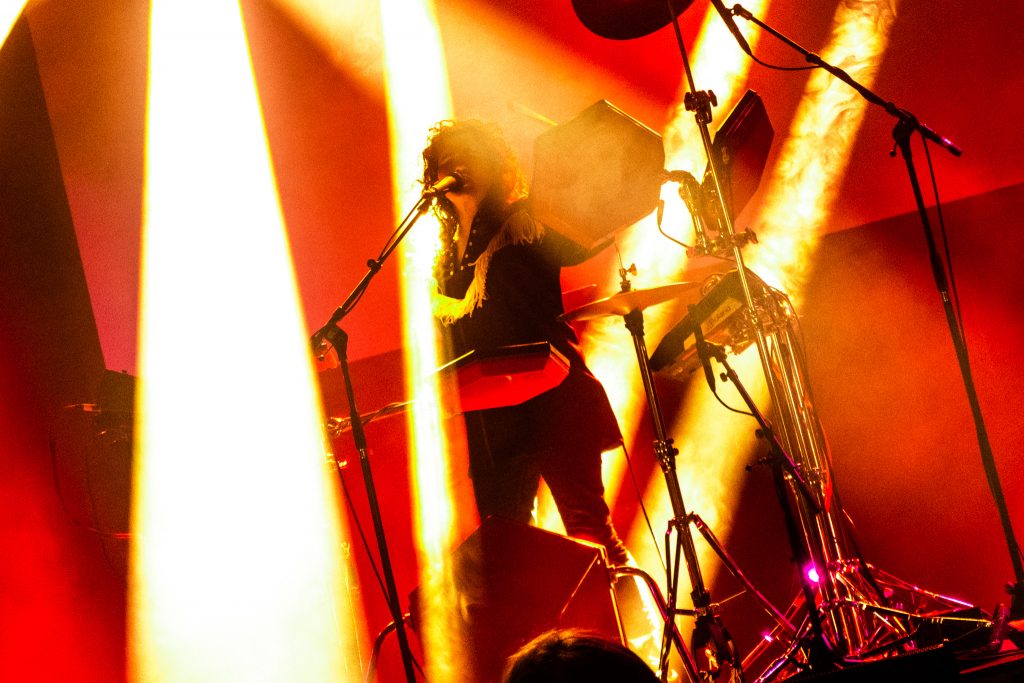 What would a music festival be without the discovery of never-heard-before acts or re-discovering favorites? While we had Flammeus already in our playlist and our must-see list, we only learned about Omotrack during the festival’s conference part, where music industry people could meet with emerging Icelandic talent.

Singer/songwriter and bass player Tumi Hrannar-Pálmason, who together with his band mates forms Flammeus, impresses with crafty vocals and intricate indie rock. Hailing from Akureyri in Iceland’s North, Flammeus’ performance was entertaining and lively and it will be exciting to see where Tumi takes his music next with so much creative potential! 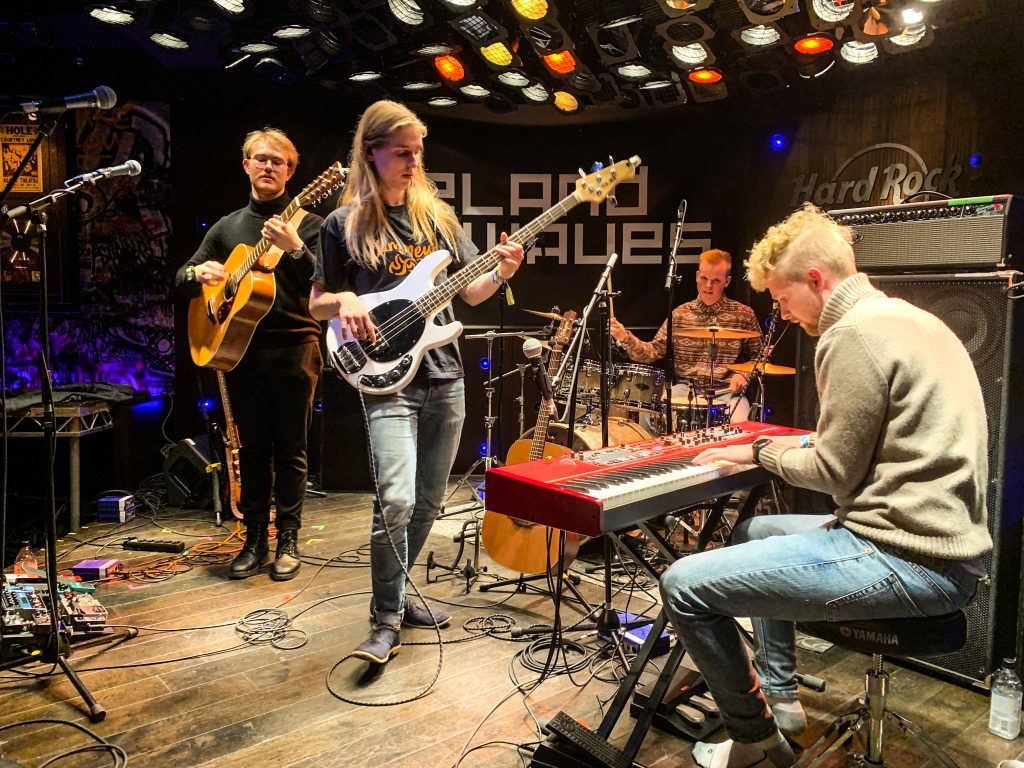 Different in style but equally compelling are Omotrack, a synth rock duo comprised of brothers Markús and Birkir Bjarnason, who delight with a very stylish performance and band presence. Their story telling is fascinating and the combination of analog gear paired with electronics, electric guitar and African rhythms is highly appealing and the two should catch on with bigger audiences shortly. 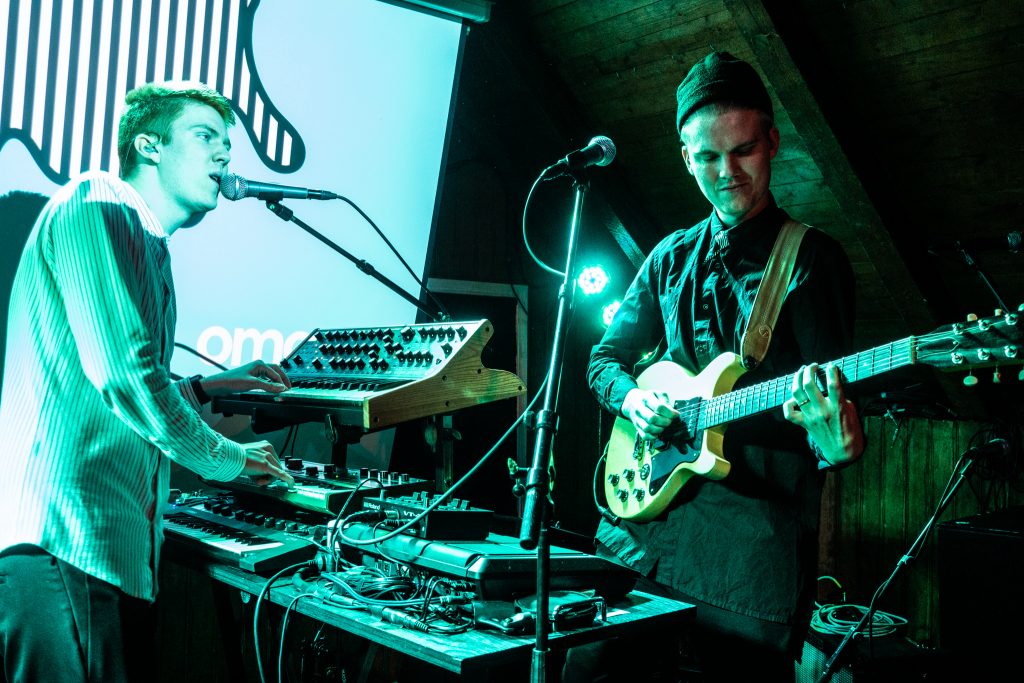 In 2016, we could not get enough of CeaseTone‘s back then just released album “Two Strangers” and  were blown away by the band’s enchanting live performance. CeaseTone’s mastermind Hafsteinn Þráinsson is highly regarded and well connected in the Icelandic music scene and while we could not see him live last year, we took the opportunity to catch Hafsteinn and his band as well as him solo on several occasions this time around. A new album is scheduled for 2020 and we know that it will be simply amazing. 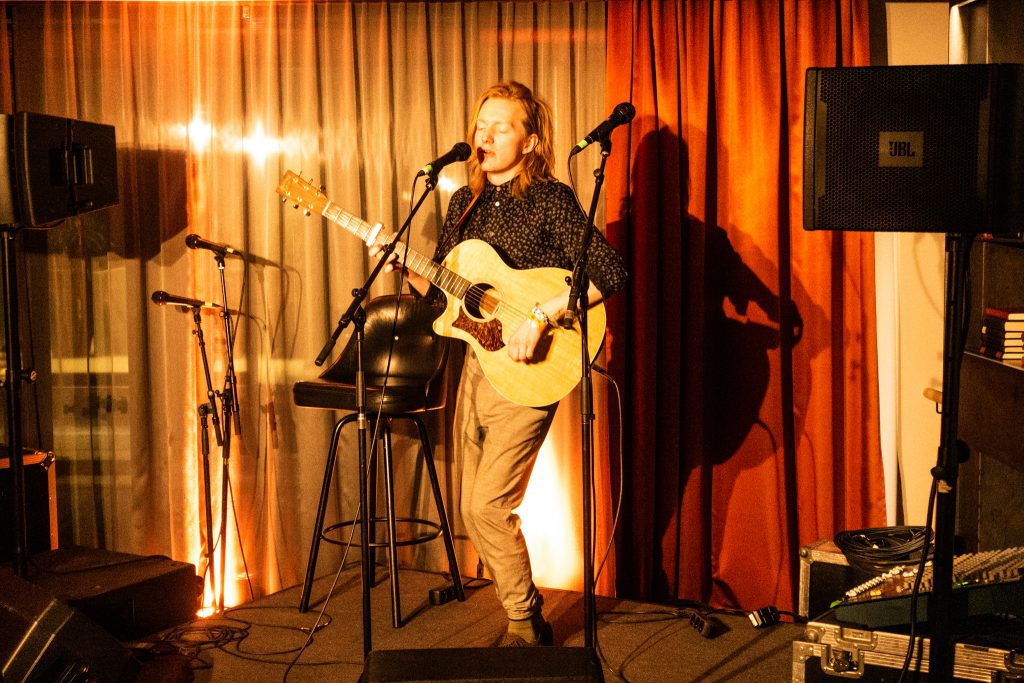 From Bright to Dark

Last year, teenager duo Between Mountains was one of three must see acts at Airwaves. We missed them due to packed rooms, but we were better prepared this year and saw them twice! Now mastermind Katla Vigdís Vernharðsdóttir  solely taking the reins, Between Mountains convinces even more with infectious songwriting. 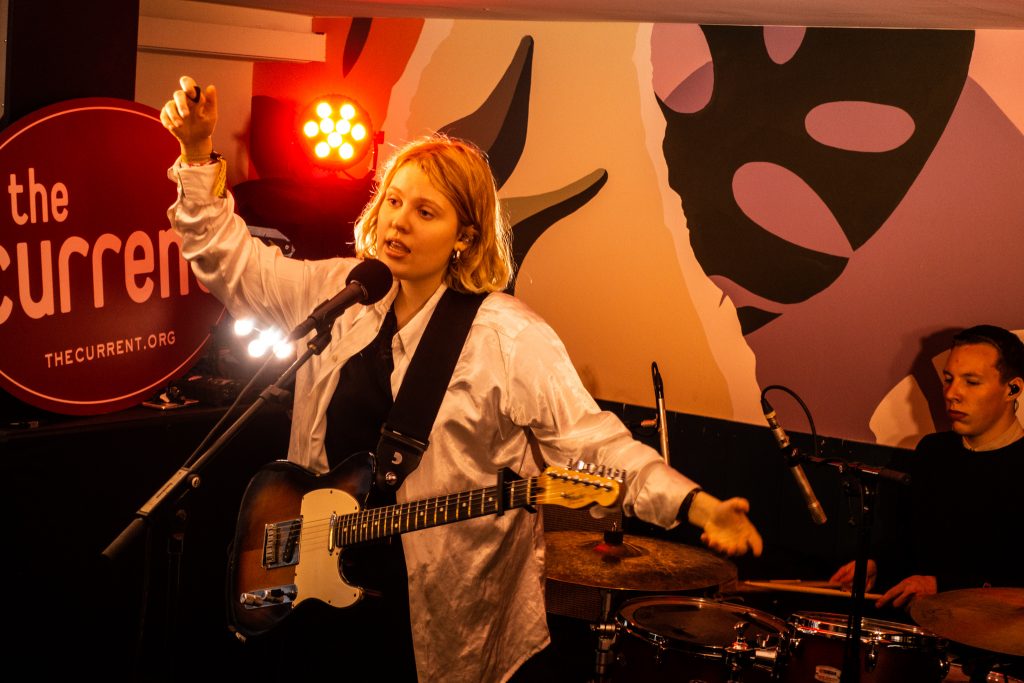 The shows of Icelandic three-piece Kælan Mikla are a dark celebration complete with incense and fog all over the stage. The songs are sung in Icelandic, but you do not need to understand the lyrics to know that they are not about the rays of sunshine that fall on Reykjavík from time to time in November.

We saw bands in official venues as well as in the “on-venues” and the “off-venues”, an Iceland Airwaves specific differentiation between officially showcasing artists and venue curation. It comes down to the fact that non-Icelandic acts won’t be playing any other venue than the official venues and usually only once during the festival with a few exceptions, like artists being picked up by the programming of Seattle’s radio station KEXP as seen at the Kex Hostel, or Minnesota’s The Current this year at the Hressingarskálinn or in short Hresso.

We are still buzzing from this absolutely amazing trip and are afraid to having been bitten by the Iceland Airwaves bug because the intimacy of the festival and its stellar curation, topped off with a really interesting two-days music industry element can not be missed! See you 2020 then…

Click on a photo and browse the gallery to get an idea of what awaits:

Listen to our #Airwaves19 playlist with artists featured in this article and others we dig and have seen or might see in the future: