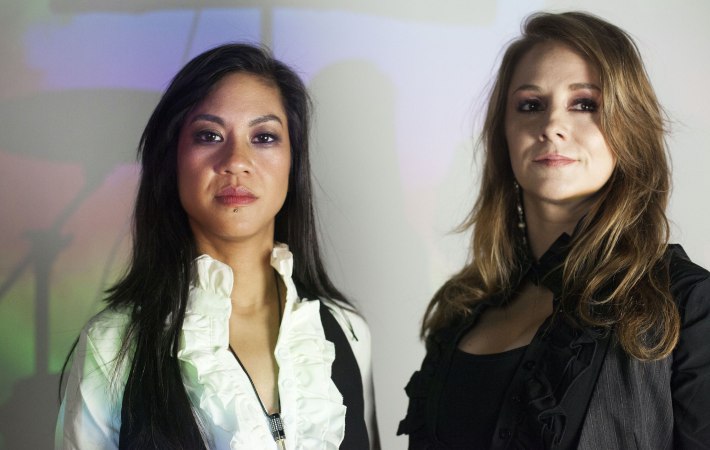 Dance Loud is the Chicago-based duo of producer and DJ Kristin Sanchez and guitarist, drummer and vocalist Desereé Fawn Zimmerman. They have just released their debut album “The Moment,” (Apple Music | Spotify) an intriguing fusion of dance-floor-ready beats and accessible, catchy pop music. Kristin and Deserée play all instruments and record and produce all music themselves. They were so kind to answer a few questions that give us a glimpse into where they come from and how their creative process works. But first, to get into the mood, watch their brand new video “Hear Me Out”:

Kristin and Deserée, you met in art school. How did each of your musical journeys start? Was there a specific moment you remember that made you think that making music could be something for you?
Deseree: When I was in kindergarten, I thought Angus Young from AC/DC was the coolest. Watching him skipping across the stage with his SG guitar was something I was mesmerized by. He looked like he was having so much fun playing his music and I was excited to have that kind of fun. My mother told me at a young age in diapers, she’d find me on the kitchen table or on top of the fringe yelling for her to come in and watch my show, singing the Rolling Stones and Eric Clapton. After years of begging, she bought me my first guitar and I never turned away from it.

Kristin: When I was in grade school I got really into wiring lighting and multiple speakers to sit in the middle and listen in surround sound. During high school, I got into installing car stereos and was sneaking out going to an underage gay club and was introduced to house music. There’s a funny story between friends of when I asked the promoter if I could DJ for the event. He asked if I can spin and I said “I’ll learn”. Once I was able to get credit cards, I maxed them out on turntables and a vinyl collection. While in college for audio, I got my own laptop and software to start producing. I never had a defined moment that I wanted to be in music. I just knew I always had the strong urge to correct any sound output. I felt like throughout my whole life, I have been on an everlasting journey on making everything sound more than perfect for my own enjoyment and would just produce tracks so I can dance or so others can have a better listening experience especially during the days when we only had the radio. It drives me crazy if a song doesn’t have any strong bass frequencies in it! 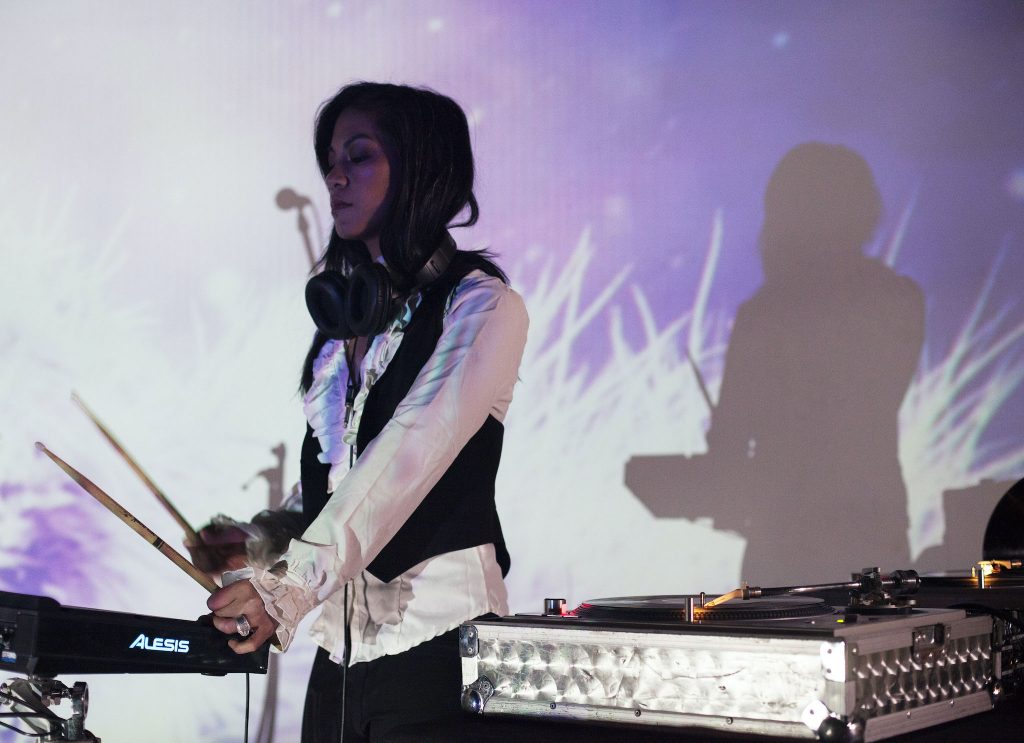 Kristin is a DJ and producer, Deserée comes more from rock music. If there was ever an argument between the two of you about your musical direction as Dance Loud, I would say that Kristin won. Deserée, how did she win you over?
Before I moved to Chicago, I had a friend that was in the rave scene. She would bring me CD’s to listen to because I was too young to go to the parties. At that moment I was introduced to electronic music and fell in love with it. When I moved to Chicago (the home of house music/electronic dance music) Kristin introduced me to more house and I became a house head ever since. On the other side, I don’t believe you’ll ever be able to fully stray from your roots so I feel our music has elements of rock within it. 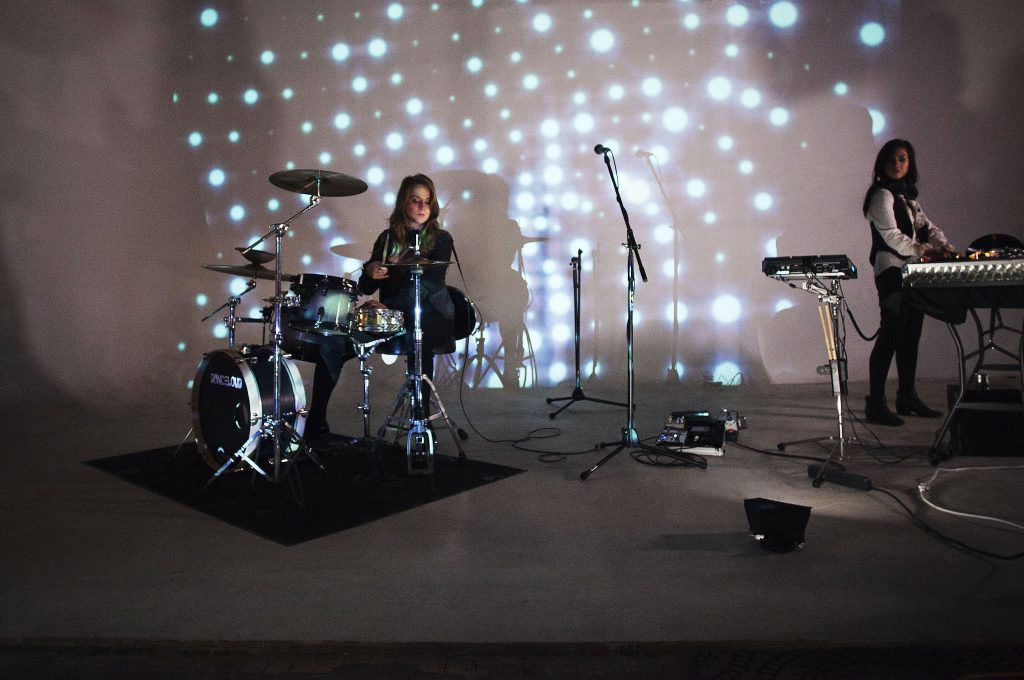 How do you write your songs? Are you working on all parts together or does each of you have a specific role in the songwriting process?
Deseree: Typically I’ll write the first chord progression and rough outline of the song and especially love creating the intro arrangements. Kristin writes most of the lyrics and I find ways of fitting it in melodically. I’ll play the guitar and bass parts while Kristin creates the synths and the structure of the song adding tension and release. We both come up with drum parts but I’ll track the drum parts while we both discuss unique recording techniques for drums. Kristin creates the ear candy with auxiliary percussion and also adds compression, delays, and other production plug-ins and automation to all the tracks. She has a way that she can make any sound, sound the way she wants it to. She is not afraid of trying something new. She can make the sound of a pop can opening sound like a spaceship taking off. If it weren’t for Kristins direction and edits, my song writing would sound very basic and formulaic.

We usually don’t ask about band names, but Dance Loud is so well chosen and almost feels like a mission statement for your music. How did you find that name?
Kristin: It’s a funny story. I worked for a children’s fitness center for over 10 years. My Brazilian manager at a meeting talked to a coworker about needing to wear deodorant at the gym and her way of describing it was “you smell loud”. When I came home and told Deseree about the story, it quickly became an inside joke between us. We would describe everything as “loud”. “That tastes loud”, “that color is loud”, finally one day we said “Dance Loud” and it stuck. It was perfect as a band name because it really explains who we are and what we sound like to bookers as it can get confusing being a hybrid band. 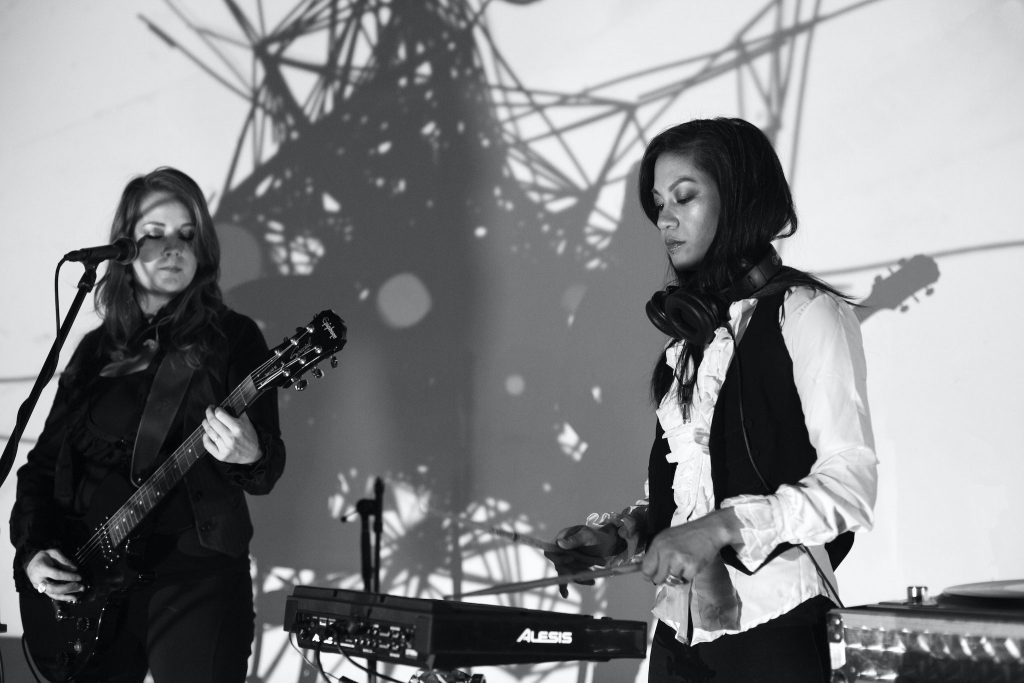 We have featured other female electronic musicians from Chicago in the past on glamglare. Do you think there is a special community in Chicago that supports women in electronic genres?
Well.. Chicago is a great city for music having roots in gospel, house, and blues but we have yet to find any city, any festival, or community that books bills or works with 50/50 male and female acts let alone electronic acts. Here in Chicago, there are a huge number of electronic music fests but there may not be enough women in the electronic genre here to create a community that we know of. To this day, female music producers and film directors make up only 2% of the industries. We still have a long way to go for music equality and/or support. That is part of the reason we are trying to show the world we are strong engineers and producers. We have to go above and beyond as women in the music industry. At music conferences, the first question we get is always “are you a singer”? We make it a point to be much more by recording and creating every sound you hear from scratch. We like to consider our music as “fine dining” because everything is made in house.

Live music is mostly on hold, but once you can go on the road again, are you considering playing with a band or just the two of you, like in the video to “Why Lie”?
Since we both play multiple instruments, incorporating that aspect live is something special between us. It’s nice to be able to play one instrument for a song then jump to another instrument for the next. “Shady Beach” was created to open the doors of performing with a brass section. We would love to create unique shows where we perform with marching bands or symphonies. We have lots of plans for the future and it includes hiring musicians for bigger shows. Deseree is very against using computers live because they can be unreliable and it would be ideal to fill the 40+ tracks it took to create the songs with live musicians. 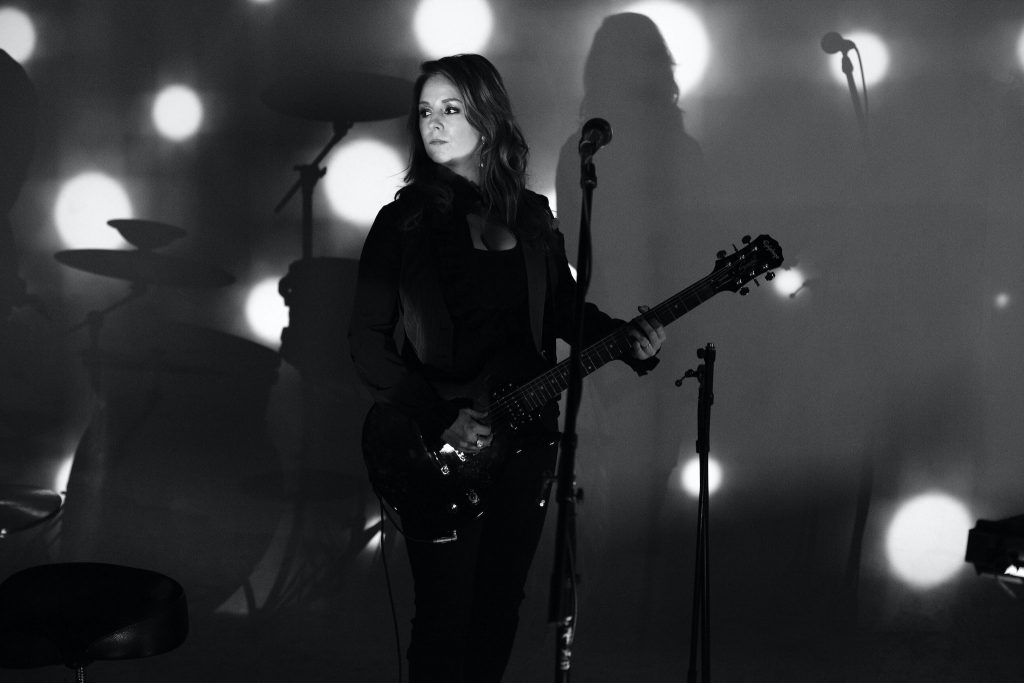 If you could time-travel out of those unlucky 2020s, which decade would be your favorite destination to make music and perform?
Kristin: I love music created from the 1990’s. The recording style in studios, the production and a lot of my favorite dance music that influenced me was created in the 90’s. It has a style to it and I will always have a deep love for 90’s recordings. I’ve always wanted to also be a dancer/choreographer and would love to be in a boy band from the 90’s.

Deseree: I am a sucker for tonal and complex music. Music that you cannot guess what will happen in the next progression and keeps you guessing. With that I’d like to go back to the 1600-1700’s to the Baroque time frame to create and study. Back when it was rumored that music was created near the 420hz A note vs today’s standard of the 440hz A.

Thank you Kristin and Deserée for taking the time to answer our questions! The 17th century is by far the earliest time we have ever had for this question!