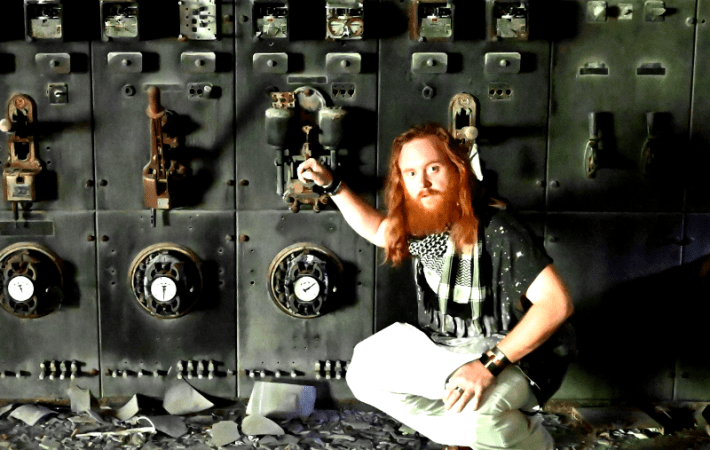 “Bad Ghost,” the new single by eclectic singer/songwriter E.W. Harris is a glorious piece of music where pensive and thought-provoking songwriting, paired with emotive vocals and skillful fingerpicking meets modern finishing touches. The Brooklyn-based artist premiered “Bad Ghost” on Saturday live at the newly (re-)opened Footlight Presents at the Windjammer Bar. Following the gifted musician playing his new songs but also gems from his older repertoire was utterly delightful. We had reached out to E.W. Harris beforehand and asked him about the inspiration to “Bad Ghost” and would like to disagree with his opening statement when he says:

See I’m not really a songwriter, I’m a guy who uses songs to try to think (and get others to think) about things more deeply.

We think he is very much a songwriter since he is telling interesting stories wrapped in beautiful sound but let’s find out what else he has to say:

In this case I guess I tried to create a protagonist that was a gender-fluid ghost that was violently murdered after acquiring a secondary soul/self/what-have-you, looking back on their life/lives. I think ultimately I wanted to see if my own experiences (filtered through an imaginary post-apocalyptic world I made up) could help me to understand just a little better what it’s like to feel trapped by circumstances (societal/biological/physical/political) over which one has no control.

This is philosophical songwriting at its best! E.W. Harries explains further:

Like in the recent discourse about gender (or personal identity generally). It’s easy to think “that sucks” or “so tragic” or lament “nothing I can do,” but that’s ignoring a lot for the sake of a convenient message. I think, like with anything, frustration, sadness, even anger are complicated with humor, acceptance, and all the other ingredients of the cocktail of experience. I just wrote this song so that I might could approximate the recipe, get a sip and see what I think. I think we did a pretty good job of it in under five minutes, but I’m biased.

We certainly agree with E.W. Harris’ closing statement because the contributing musicians and producers did an excellent job indeed. “Bad Ghost” has all the ingredients of an indie folk-rock hit, with killer vocals, wicked production, and all.

Listen to “Bad Ghost,” our Song Pick of the Day:

Connect with E.W. Harris on Facebook, Twitter, and Instagram and add “Bad Ghost” to your playlist as we are adding it to our glamglarepick playlist on Spotify:

Some visuals from E.W. Harris’ fantastic live show. Follow his socials to be in the know about the next one. (Click on a thumbnail to enlarge the photo.)

== All concert photos by glamglare.com – © 2021 Elke Nominikat and Oliver Bouchard ==