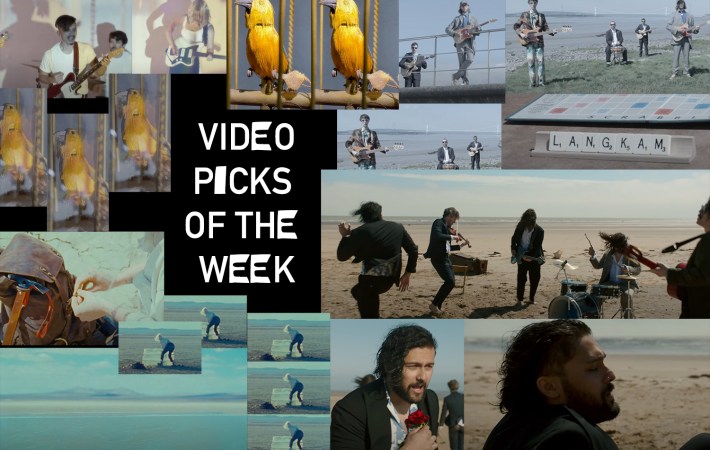 “Canaries” is an explosive indie-rock banger by L.A. quartet Cuffed Up. And how can this kind of music be better celebrated than with a well-put-together life performance video? The band says about the song:

“‘Canaries’ is about going down a path that you know is wrong but you keep going because some form of shame is driving you. You’ve put warnings in place, like the canaries, but ignore them when they alert you of danger. Sometimes we become numb to the burdens we carry, like the sensation of needles when you cut off circulation. Eventually, we need to come to the realization that ‘truth is heavier than lies’, that it’s easier to roll over than fight your way out.”
Watch the video now:

The new video by Australian indie-rockers Gang of Youths, directed by Joel Barney, shows the band on the beach and frontman David Le’aupepe explains:

“unison” is a deeply important track for us that really signals where the music is headed on the new record. I conceived the song in Samoa, my ancestral homeland. Here we sample and introduce the work of David Fanshawe, who travelled to the Pacific Islands in the 1980s and recorded the most extensive library of indigenous Pacific music anywhere in the world.

The video picks up a flurry of different emotions from pensive to effervescent, from loneliness to joyful celebration. It’s an incredibly moving video to a gorgeous song! Watch the video now:

Lillie West, aka Lala Lala, lost her key and went through some considerable trouble to get it back. The video “Diver,” co-directed by her and Brielle Brilliant, references a figure from Greek mythology who was condemned to perform the same work for all eternity. Lillie explains:

“I think it’s easy to feel like we keep making the same mistakes over and over again, that we’re Sisyphus. The key is falling in love with the labor of walking up the mountain.”

And another band video that takes the beach as their backdrop. This is the season, isn’t it? British four-piece Langkamer seem to have a lot of fun filming the clip even if they don’t really show it. “Humdinger” is taken from their upcoming album West Country, scheduled for September 10th via Breakfast Records / TINA. Langkamer’s frontman says:

With the video I wanted to satirise the promotional corporate hellscape, to poke fun at the world of work using ludicrous scenes that make almost as little sense as capitalism itself. We filmed on the hottest day of the year and every member of the cast and crew suffered from varying degrees of heatstroke. This probably added to the delirium somewhat.

We love the hazy, lazy vibe and have “Humdinger” humming in our ears! Watch the video now: