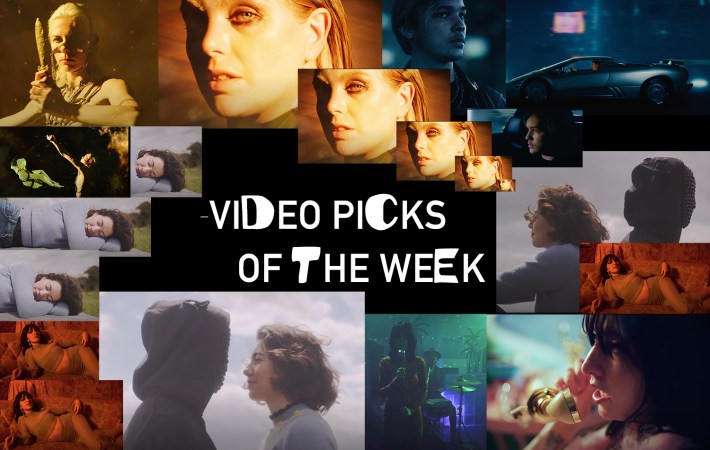 The original “Battles” is the opener of Emika’s 2015 album “Drei.” The sequel, which features Sebastian on the violin, is a different experience. The video adds to the mythical experience: directed by Zee Marla Osh, it shows a cosmic battle between fantastic figures.

Elijah Hendrix Wahlberg aka Pink Laces shares the newest single from his upcoming album Disclosures and the crazy catchy song comes with an intriguing video. It conjures the vibe of movies like The Matrix or Blade Runner and reminds us also of John Mayer’s famous fan video for “Assassin.” In short, Pink Laces “Paradigm” is an instant classic and a must-watch. And when carefully reading the press release, we even find ourselves confirmed, when Pink Laces says about the video:

I think our director Erik Rojas really captured the visual essence of ‘Paradigm.’ That real ‘Blade Runner’ type look is what we all envisioned going into it and seeing myself standing in that world on my screen was insane. The product of our combined creativity was a real rockstar moment, for all of us.

We LOVE the synth-laden song and its rad guitar solo and the video makes us like the track even more and anticipating Disclosures!

Piroshka is a British supergroup fronted by singer/guitarist Miki Berenyi. Their latest single, “Loveable,” is indeed a love song, albeit a literally pitch dark one, if you take the video into account. The song is from Piroshka’s brand new album “Love Drips & Gathers,” out on Bella Union.

Los Angeles-based artist Valeree got us at “70s inspired” with their new video “Say The Word.” We love the atmospheric images and hey, who isn’t waiting for someone to “say the word,” which doesn’t necessarily always imply just one thing. We’d have some more thoughts on the song and video but Valeree offers so much insight already, that we’d like to turn the spotlight on her. Valeree says:

This is the first music video where I’ve ever had a performance element. The instrumental part is just so cool, my director (Christian York) and I both really wanted to highlight that. The drummer (Devin Pruden) and keyboard player (Max Berlin) are both the people who actually recorded on the song, unfortunately my guitar player (Adam Allison, also producer) couldn’t make it so we subbed my friend Vernell Daye in. Vernell was actually the rhythm guitar player in my first ever band though, so it was super cool to be able to shoot with them and showcase some of the people I’ve worked with musically in the visual. We shot at Vitawood, a LA venue owned and curated by local LA artist Vita Kari, who is a friend of mine. The whole space was designed and painted by her and it’s filled with sculptures and paintings she’s done. It’s such an awesome space and I thought it’d be the perfect fit for the 70’s look. Shooting was really fun, I basically got to play dress up as a 70s character and fuck around with a bunch of my friends. I worked with the same director I’ve worked with on all of my videos, and the DP (Mario Garcidueñas) who shot “Deity”, so I was very comfortable with everyone there and it was just a lot of fun.