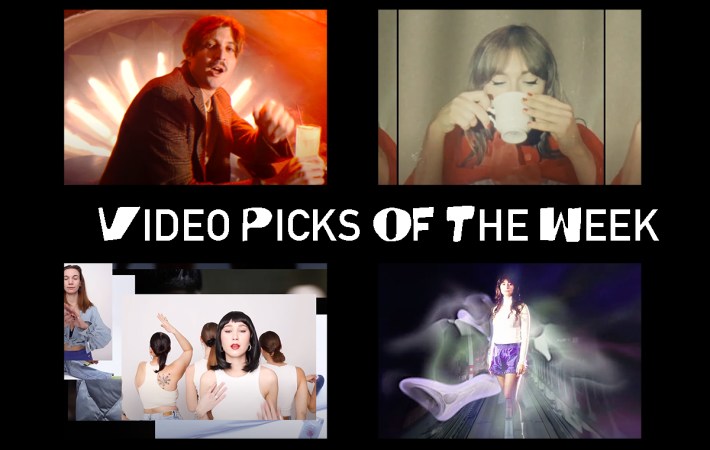 You don’t need to be a musician to understand the addictiveness of partying, and what we were collectively missing when everything shut down in 2020. But while we could no longer party together, the drinking was still possible and maybe also in smaller circles and parties. “Bottle,” the single and video by Dude Low is a song that draws attention to how drinking, partying, or doing drugs creates illusions for people searching for a vice.

Watch the video, directed and filmed by Simon Barrau, now:

Wales is definitely one of the musical hot spots these days with so much great music coming from there. We dig the edgy pop vibe of “An Stevel Nowydh” (The New Room) and think Gwenno did a fantastic job with filming and directing the video herself.

Gwenno says about the track and its visuals:

“An Stevel Nowydh” (The New Room) is a song about finding yourself somewhere entirely new and realising that you’re completely lost, and acknowledging that the only thing to do in an existential crisis is to don your favourite hat and dance! The short is part of a longer film that I’ve created with Anglesey-born filmmaker Clare Marie Bailey due to be revealed this summer. It was shot on Super 8 in Bryn Celli Ddu, Mynydd Parys, and Porth Ia (St Ives) during Summer 2021, it was edited by Joan Pope and stars the incomparable Eddie Ladd as ‘Greddf’ (Instinct).

“Slooowly” is about “Unfiltered & unconditional love.” Norwegian musician Marie Noreger(https://new.glamglare.com/artist/marie-noreger) ‘s first self-produced track is hot and seductive, and so is the video directed by Oswald Amoa.

“Sightseeing” is just that: a wild ride through a city, revealing more than just its buildings and streets. L.A. duo Tempers(https://new.glamglare.com/artist/tempers) enlisted Clayton McCracken to create an extraordinary visual experience. The band’s Jasmine Golestaneh explains:

“‘Sightseeing’ looks at the thrill and struggle of urban life. It’s a song about finding meaning by constantly dissolving, renewing, and redefining oneself, amidst the machinery of the city. The video explores how psychic traces left by memory can transform architecture, and animate parallel worlds. It’s also a continuation