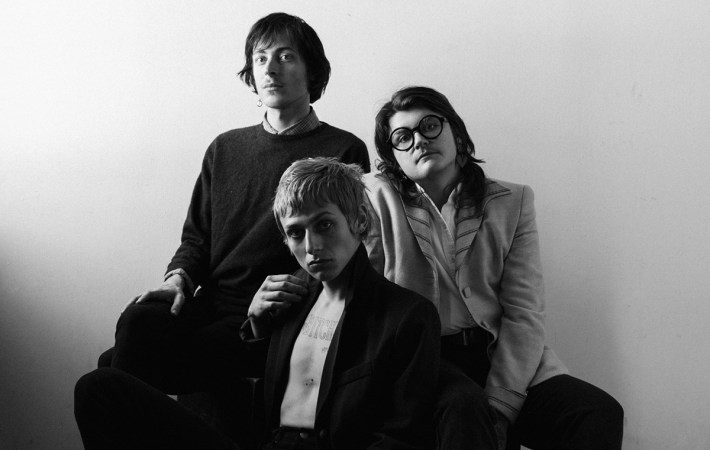 Filed Under: New Colossus, Song Pick of the Day — By: Elke Nominikat

One of the most exciting bands to play this year’s New Colossus Festival are Thus Love, a post-punk trio from Brattleboro, Vermont. The three-piece just got signed to Brooklyn label Captured Tracks, and their debut album is announced for this fall.

With only one song officially released, this one song must be really good to make such an impact, and “Inamorato” is exactly that: magnificent! Listening to “Inamorato” is like going on a sunny boat ride that takes some unexpected turns in more turbulent waters, making the experience thrilling yet ultimately also more satisfying once safely back on land. The bass line is mesmerizing, the guitar bright and beautiful and the vocals deeply fascinating.

Lyrically, “Inamorato” is a song of hope and resilience, a tale of refusing to give in to dark thoughts even when facing the grimmest of circumstances. All three band members identify as trans and have spent years struggling on the margins. Asked about Thus Love, lead singer Echo Mars (she/her) says:

For us, THUS LOVE is much more than a band. We all came from small towns without many people like us, and it wasn’t until we arrived in Brattleboro and started playing music together that we found a community to truly call our own.

What I hope we’re able to accomplish with THUS LOVE is to redirect opportunities to those who haven’t had them and to create communities in the kinds of places where we grew up. We want them to know they’re not alone.

“Inamorato” comes with an inspired video, directed by Eleanor Harmon and Brigid Kennison, and tackles the dark subject matter with a bit of sardonic humor. In essence, it’s a fantastic video of an exciting young band not to be missed!

Watch the video and listen to “Inamorato,” our Song Pick of the Day:

If you’re in New York, catch Thus Love during any of their four New Colossus shows. Connect with Thus Love and add “Inamorato” to your playlist as we add it to our #glamglarepick playlist on Spotify and AppleMusic: