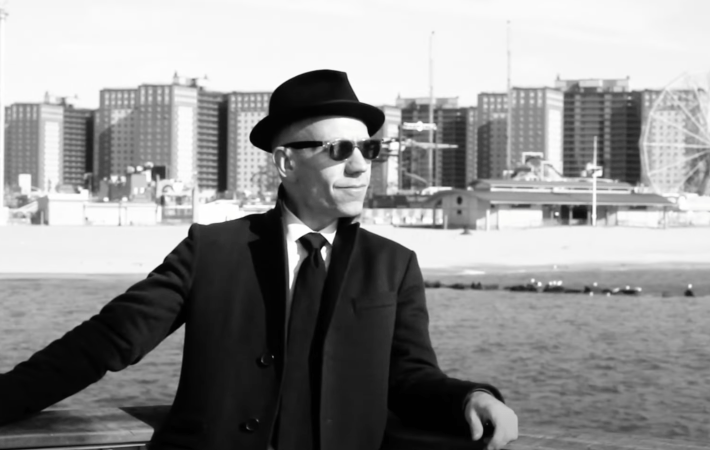 From the first moment, I listened to Blake Morgan‘s previous single “Down Below Or Up Above,” I became a huge fan of the artist and explored his back catalog with great joy. Had my fandom not already been sealed with that song and its beautifully cinematic video, then “My Love Is Waiting” would have done the job. Listening to the second single of Blake Morgan’s upcoming album Violent Delights (May 20, 2022) is an exhilarating, almost spiritual experience. “My Love Is Waiting” is incredibly gorgeous and just one of these songs you cannot get enough of and want to immediately play again even before the track has ended. So. Good.

To make this already alluring experience even better, the sonic love letter to New York City is accompanied by a fascinating black and white video shot entirely on location at Coney Island and on the New York City subway. The music video marks the second collaboration with Alice Teeple who created another instant classic. Morgan says about the filming of the video:

We wanted motion, propulsion––just like the song itself has. A modern-day music video crossed with Walter Hill’s The Warriors, full of energy, and full of hope. We also wanted to keep to the aesthetic of the whole record, as we did with the first video: one of classic cinema, where you’re not quite sure what decade this video was shot in. Alice and I both live and breathe that stuff. It’s why we have such a short-hand vocabulary when working together.

In the context of his upcoming album, Morgan says:

If I had only three minutes to play anyone anything from this new record, I’d pick these three minutes. It’s a brazen love song that dares you not to get out of your chair.

That’s exactly how I feel each time I press “play.” I almost don’t dare to breathe, certainly not move to not break the spell.

While I adore “My Love Is Waiting” and cannot wait for Violent Delights to drop, I am in awe of the many talents of Blake Morgan: a multi-instrumentalist, who writes, records, and produces his own songs, lends them his gorgeous vocals but also records and produces other artists, for example, Lenny Kravits or Lesley Gore, to just name two. Time to see this exceptional talent live, and there’s plenty of opportunity later this month!

Now, check out “My Love Is Waiting,” our Song Pick of the Day and watch the mesmerizing video too:

Connect with Blake Morgan and add “My Love Is Waiting” to your playlist as we add it to our #glamglarepick playlist on Spotify and AppleMusic: