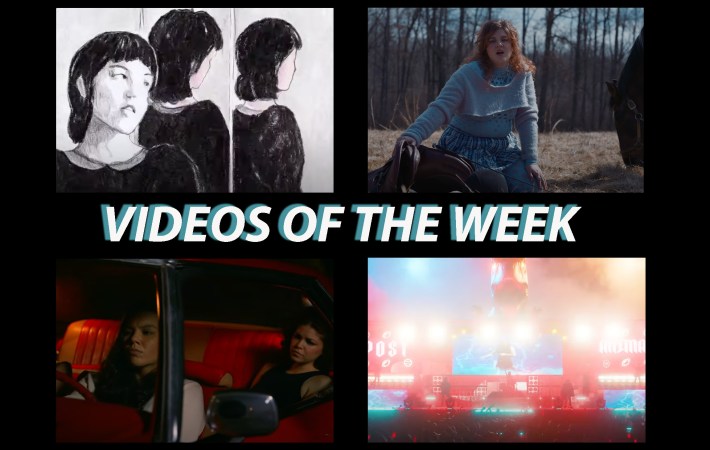 Dana Gavanski – I Kiss The Night

A hand-drawn video like Dana Gavanski‘s “I Kiss The Night” automatically recalls the famous music video by Norwegian pop band A-ha, no? The track is taken from her forthcoming album When It Comes, out on April 29 via Flemish Eye. The video is made up of 1,700 hand-drawn frames, which comes down to 12 drawings per second, that create a mesmerizing stop motion animation that fits the music beautifully.

The nocturnal and lulling atmospheres evoked by Dana’s song had me design a video treatment that aims to represent a dreamscape, or, more precisely, the moment of drowsiness happening right before falling asleep. By entering the door of the liminal space between awake and asleep, the character erases the external world and enters within her brain, experiencing a maze made of layered visions, distorted perception of self, time and space, intrusive thoughts that range from playful-bizarre-uncanny sequences to reassuring memories, in the attempt to fall asleep and finally shut the door.

Dana was cat-sitting at in her friend’s apartment in Montreal and says about the track:

It’s an ode to the night, learning to lean into its magic and the spookiness of solitude in a winter storm.

Electro-pop musician Nicole Morales aka forgetmyname vividly shows the spiraling thoughts that run through her mind after a tough breakup in her new video “Complex.” She explains:

“I was out driving and just being dramatic about a breakup and the lyrics just came. It was 5am and I had been driving and really just having that “Mr Brightside” by The Killers moment of just envisioning them with someone else and just destroying my head in mental images….”

Will Brooklyn-based musician Grace Ives ever mount the horse? Will she ride off into the sunset? “Lullaby” is the latest single from her album “Janky Star,” out June 10 on True Panther.

Grace says about the song:

“Living the same day over and over again. This song is about the comfort and anxiety that comes with isolating yourself. Homebody’s anthem.“

We were immediately fascinated by “No More Sports,” the new music video Chicago five-piece Post Animal. It is beautifull bold and so much fun in its execution. There’s more to the song though, as the band explains:

“No More Sports” is an ode to early arena rock of the 80s with a twist of ego death. All the bravado of a hair metal song with lyrics that examine self accountability. We all deserve to let loose in the circle pit of life, but never at the expense of others. We’re not playing games anymore.”

The accompanying video finds the band rocking a sold-out stadium show, complete with pyrotechnics and more surprises, and we totally dig the surprisises. Post Animal says:

We wanted something visually stimulating that emulated the tongue in cheek nature of the song,” they explain, “We all grew up in the Tim and Eric/Tenacious D era of corny, over-the-top animation and think the style is not only hilarious, but entertaining. Plus who doesn’t want a T-Rex AND a dragon in their video???