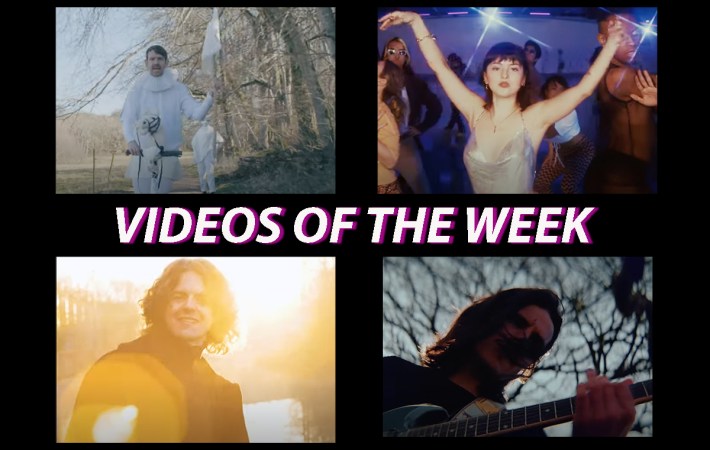 Founding member of the beloved Gothenburg electronic group Little Dragon (we’re big fans and have seen them live a few times!), Fredrik Wallin was and is busy with many different projects. His latest release is the gorgeous “Banner Burns” which he put out under the artist name x FredAtlast. And as FredAtLast he has an EP coming out 13th of May, titled Banner of a lost belief. “Banner Burns” is taken from that EP and it shows Fred and friends dressed in ruffs and tights frolicking on electric scooters disguised as lamas in the Gothenburg countryside.  Yes. That.

But hey, watch the video, directed and filmed by Alice Winroth now:

We cannot get enough of the disco vibe in “Tears at Bae” by Ecuadorian singer/songwriter Carla Huiracocha aka Neoma. So here is it again, together with a delightful video showing the artist dancing in a roller disco. Neoma is also preparing for the release of her bilingual album “Hyperreal” this Friday.

The Blinders – Fight For It

British alt-rockers The Blinders delight with a beautiful band video for their single ‘Fight For It,” a video that every fan is longing for. The track is taken from their forthcoming EP Electric Kool-Aid (Part 2) out on May 13th, and the vinyl out one month later. Pre-order the vinyl (in creamy white!) here and definitely watch this super cool video:

We are very much looking forward to listening to Tom Jenkins‘s upcoming album in its entirety, having recently featured the beautifully mellow “Back Roads,” and couldn’t resist featuring now the fantastic “Magic Mushroom Island” with a guitar solo for the ages! Tom Jenkins enlists Motörhead guitarist Phil Campbell for the outstanding guitar work and says about the song:

Lyrically, the song is a celebration of strangers in the depth of lockdown. I had not left my farm in the hills of the South Wales Valleys or seen a soul for weeks, until a number of random people started showing up and scouring the fields. Apparently word was getting around a local uni that our fields were rich in Magic Mushrooms and it was quite the hot spot. It reminded me of the film ‘The Beach’ which influenced the title. This random occurrence did bring much joy and laughter with strangers to a somewhat lonely time.

That’s quite the story, isn’t it? Watch the video, directed by Lewys Mann, and watch it until the end to not miss a single thing: