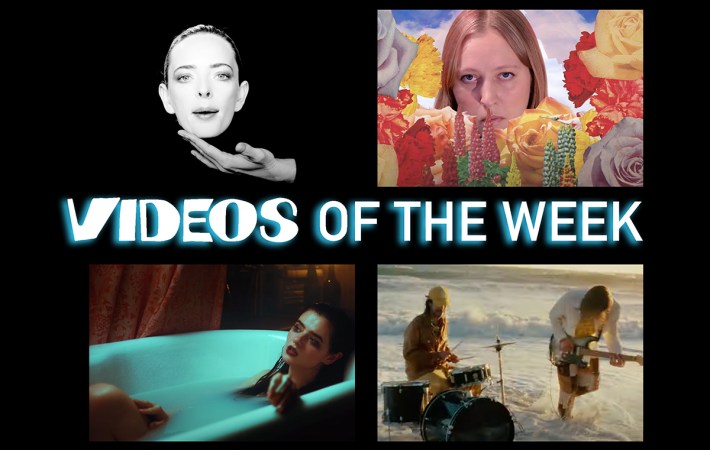 “Superfan,” the video, fascinates from the get-go. The new work by Chelsea Jade sees the artist in close-ups and surreal positions, all kept in black and white. The song is taken from her new album Soft Spot, out on Carpark Records.

New Zealand-based Chelsea Jade is self-reflective and very open when she explains:

I’m not easy going by nature and I fortify myself in unflattering ways to get through social situations. I become acerbic to assert my value in the room when what I really want is to be well-liked and respected, like bristling is the correct way to brush up on people. On the session – to work with Leroy James Clampitt is to be understood. He’s got a natural empathy that allows good humor about bad feelings, hence the little exchange voiced in verse 1.

Learning more about the context of “Superfan” makes the song and its visuals even more appealing and mesmerizing.

Another third single with a combined live-action and animation video comes from Toronto-based singer/songwriter Eliza Niemi. The crafty clip puts a moving collage in front of her singing. Eliza gives a hint on what the song is about:

“Murphy’s” ruminates on a one-sided standstill in a relationship, makes a spiteful and overly-simplified declaration (“it’s enough for me but it’s not enough for you anymore”), then ends in introspective silence. The song is about processing, and paints a picture of being in the midst of doing so.

London-based singer/songwriter Rosie Carney released the third single from her upcoming album “i wanna be happy” with a mixed live-action and animated video full of symbolism. Rosie says about the song:

It’s about the lonely ache you feel when you realise you’re starting to drift away from someone, but there’s nothing you can do to stop it from happening. I remember being a kid and desperately overanalysing and trying to change who I was in an attempt to cling on to whoever I was drifting away from. The song is both a desperate plea and also an acute awareness of needing to let go and move on.

The Darcys – Washed Away

We love The Darcys and the Canadian duo seems to really dig the friendlier temps of California if the brilliant video for “Washed Away” is anything to go by. The band says about the song and video:

“Washed Away” is about trying to keep your head above water. The expectation for new music and endless content means sink or swim for artists like us. If you’re not always generating, releasing, and growing, it’s easy to feel like you’ll quickly be forgotten. The lyrics tackle some pretty heavy stuff, so we wanted the video to counter that with something fun and literal to capture those themes. There’s really nothing more literal than watching us pretend to be totally fine as we struggle to keep our heads above water.

As an artist manager and music blogger, I have a very good idea of what Jason Couse and Wes Marskell are talking about and can totally relate to the message, in words and visualization.