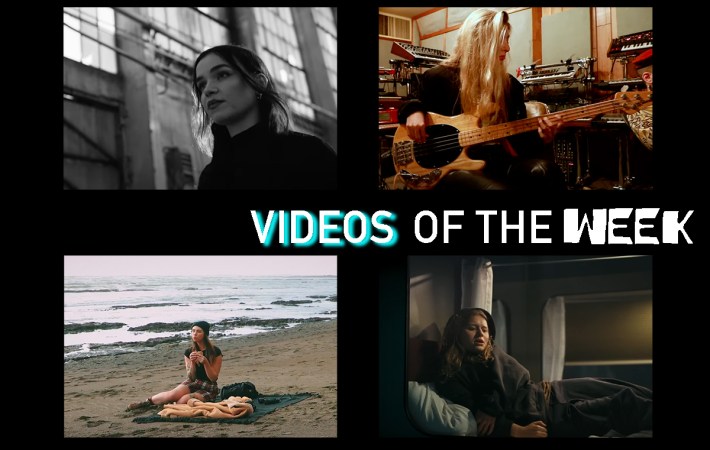 “I’ve always loved ‘music video’ as a concept. The thought of making visuals to fit the sound is intriguing. Working with Pernille and Herwig to create this magical, dark universe was such a fulfilling experience and I can’t wait to share it with the world.”

While officially labeled as a “lyric video,” we’re floored by the vibrance of “Blutooth” and the feel-good live-session vibes of Blu DeTiger‘s new video. Watching “Blutooth” feels like we are in the studio together with the brilliant bass player and the iconic electro-funk duo Chromeo. Blue says about the experience:

I’ve been a fan of Chromeo for as long as I could remember. Growing up I would go to every Chromeo show in New York. I have always admired their musicianship and taste, both musically and aesthetically. They’re the experts of cool (I call them the “cool police”). It’s all vibes. Constantly. They’re so detailed and they listen so deeply. It really is a dream collaboration of mine. Once we got into the studio we just had so much fun together. I felt really respected and heard, and we just get along so well that it was hard for us not to make something that we loved.

The shared energy and joy are definitely visible in the spirited video. Blu also answers what many musicians might want to ask:

For all the bass heads out there, I played a vintage stingray bass with a vintage Mu-Tron III pedal on “enough 4 u.” It’s the only way to really get THAT sound. That was pretty dope.

The new video by Caregiver, the new project of Lindsey Bitson, keeps you on the edge of your seat from the spot. Something’s going on but what exactly? The sound is pleasing and the visuals are intriguing and that alone already makes a great music video. The Sacramento-based musician provides more background about the song and its video and says:

It exemplifies the pain, darkness, and discomfort associated with drug use. It was written during a sort of rebirth through spirituality, sobriety, and contemplative meditation. The subject matter is pretty heavy, so I chose to pair the song with a whimsical and playful Anderson-esque drug trip. It was also one of the only songs on the album that didn’t sound completely sad and serious. I enjoyed the opportunity to have some fun with the visuals.

Also from Norway is Marie Ulven, aka girl in red. “Hornylovesickness” was first released over a year ago, and the video directed by Hunter Schafer gives us a glimpse of what touring for a successful indie artist looks like. Marie shares:

“‘hornylovesickmess’ is one of my favorites off the album. Being able to make a video with Hunter for the album’s anniversary was so cool. We had so many ideas after the first time we hung out and it was cool to be with another creative in that way. it was also fun to be on set with her and get her vibe as a director.”