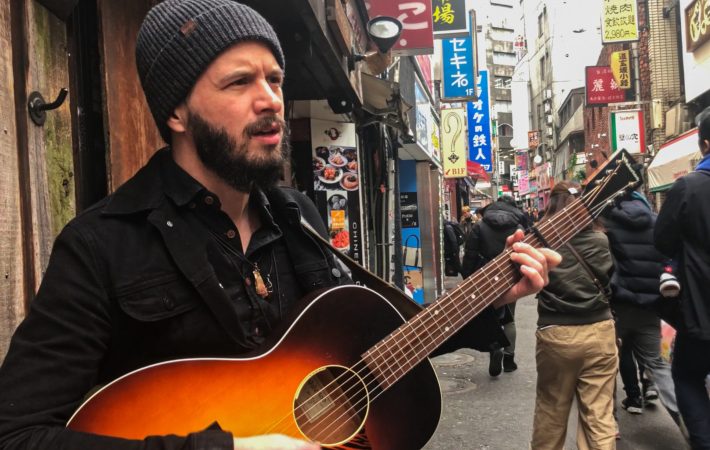 Filed Under: Premiere, Song Pick of the Day, Video — By: Elke Nominikat

Nashville-based singer/songwriter James Paul Mitchell  is about to release his new album Breakup Record this Friday and offers beautifully wistful and atmospheric visuals for his gorgeous single “Tokyo.” Mitchell says about the song:

“Tokyo” represents the pain of letting go of a lover, of the future that you had painted in your mind with them, of an abandoned proposal. It’s a deeply personal song for me, but I think the pain and ultimately the acceptance of this sort of heartbreak is universal.

The universal appeal is undeniable, and it’s always interesting to see how artists deal with heartbreak creatively. We are excited to premiere the lovely, moving video today and can’t wait for the album to drop. The quiet “Tokyo” marks the fifth track on Breakup Record (pre-save), following an intriguing yet ambitious concept: each song is produced by a different person!

On some tracks, Mitchell is the one who plays acoustic guitar and sings and lets a producer take over all other parts. Then there are tracks where he does everything himself and outsources only chore-producing tasks. To help Mitchell realize his vision, he turned to a slew of producers: Dan Knobler (Lake Street Dive), Jake Finch and Collin Pastore (Lucy Dacus), Louis Johnson (Lonas), Graham Bechler (Russell Dickerson), Kramer Kelling, Aaron Shafer-Haiss (Wilderwater), Paul Babe (Rossonian), and guest musicians including Anthony da Costa (Sarah Jaroz), Maya De Vitry (The Stray Birds), and Caley Conway.

What can be said about love and breakups that hasn’t been said before by so many others? There’s both a uniqueness and universality in any heartbreak. To me, making this record felt more like therapy than anything.

We are excited to exclusively premiere the beautiful video for “Tokyo” as our Song Pick of the Day. Kramer Kelling produced the song, Mary Mitchell filmed the performance, and Mitchell filmed & edited the clip. The juxtaposition of troubadouring and big city impressions is brilliant, and the result is a music video to enjoy watching more than once.

Let yourself transport to “Tokyo” now:

Connect with James Paul Mitchell and add “Tokyo” to your playlist as we add it to our #glamglarepick playlist on Spotify and AppleMusic: