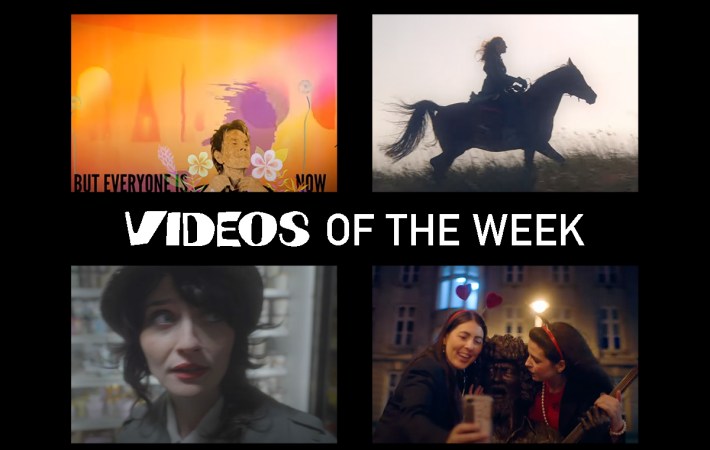 “When you had to find your way home without a phone” is a line that stayed with me long after “Analog” has ended, and it is even only one beautiful lyric nugget out of many. Some might dismiss the music video as a ‘lyric video,’ but I think it is an exciting piece of visual art that also happens to display the lyrics, which are fantastic – see above. The production of the track is equally fascinating, with its mix of sleek electronics morphing into warm and comforting analog sound, complete with turntable crackling.

In short, David Poe has put out another stunning single and music video and gears up for the release of his album Everyone’s Got A Camera, out September 23rd, 2022, on ECR Music Group.

We love the multifaceted feel of Néomi‘s new music video, where she effortlessly combines flowering meadows with playing Badminton and riding on a horse (sic!). The Surinamese/Dutch folk-pop singer-songwriter Neomi Speelman aka Néomi says:

The song ‘redemption’ is really an ode to my family. For them putting up with me for many years and me wanting to let them know that I have their back now because of it. It made sense for the video to be influenced by memories I have with my family when I was growing up, specifically times we spent camping in France during the summer holidays. Those times felt so careless and free, just being there together. Now, I hate camping haha, but back then it was magical. Nothing else mattered, only who won when we played badminton. The biggest challenge with the video was finding a decent badminton set in The Netherlands! And playing it well too. In short the video reflects how much I love them, my family, but also the rough times we went through too.

I have yet to meet somebody who enjoys being mocked by a mime. But for Brooklyn-based singer/songwriter Scout Gillett he symbolizes the elusive signal she tries to find in her relationship. She says about the self-directed video:

“I chose to make the object of desire a sandwich rather than a lover… I wanted to channel the slapstick work of Charlie Chaplin. I never end up finding the sandwich, just the mime pretending to chow down. I think lightness is achieved by letting go and embracing uncertainty. As in the video, which ends in laughter and acceptance, there is joy in surrender.”

The new song by Sorcha Richardson “Shark Eyes” is about the rollercoaster in an intense friendship. The video shows that extreme fun together and fallout are just moments apart.

“The song is very visual and introspective, so it was fulfilling to translate this onscreen. The decision was made early on in the process that the relationship we portrayed wouldn’t be explicitly defined, so viewers can bring their own experiences to the piece. Throughout filming, we sought to capture little moments of authenticity, intimacy, and the nuances of female friendship. The energy between Sorcha and Lauren is so palpable and electric, I think they capture this brilliantly.”